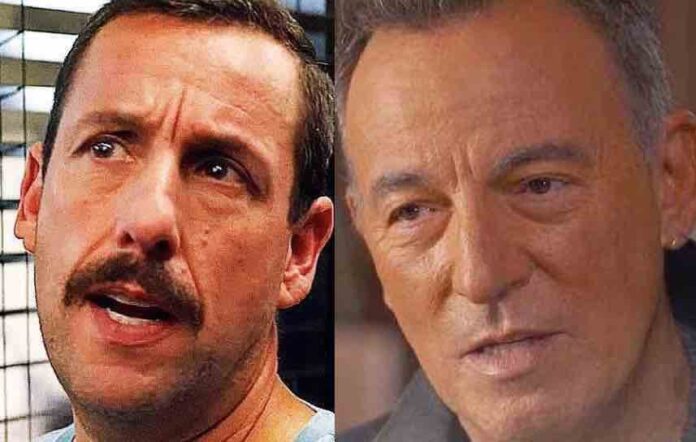 Adam Sandler was recently a guest on Late Night With Seth Meyers in which he promotes his newest film, ‘Hustle’ which the script was given to Adam Sandler through Lebron James’ production company. Adam Sandler, being a huge basketball fan and great basketball player himself, was all hands on deck for this one. That said, Adam Sandler is also a huge fan of music. One of Adam’s favorites is none other than The Boss, Bruce Springsteen, who has been getting some backlash lately. While Adam might be a huge fan of Bruce, it seems that Bruce may not find the same fondness for Adam Sandler.

As Adam Sandler was talking with Seth about the crew that was involved with ‘Hustle,’ he mentions that an epiphany just struck him in the form of a story.

Adam Sandler says to Seth: “You know what I never told you? Bruce Springsteen – I might have told you this one. You can cut it out if it’s too long. So, I went to the gym – I used to work out. I used to go. I’m not as funny as everyone on the show, but I’m gonna look better.”

As Adam goes on, he starts talking about running into Bruce Springsteen in a very odd place.

Adam Sandler: “So, I’m at this crappy gym and I see this guy and I’m like ‘That guy looks like Bruce Springsteen.’ I’m on this thing (as he imitates a chest fly machine) and I look at Bruce Springsteen and he looks at me and he goes ‘Hey, I know you.’ I go ‘You do?’ He goes: ‘You’re, uh, Alan Stanley.’