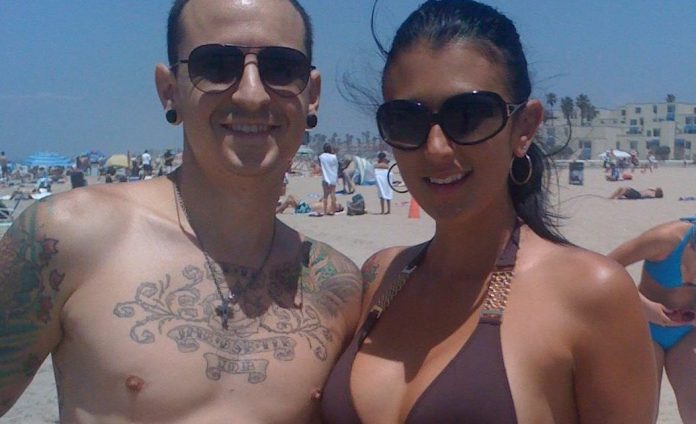 Talinda Bennington, the widow of Linkin Park vocalist Chester Bennington, recently took to her Twitter account and posted the screenshot of the email signature of Chester, which had been sent out during the Earthquake in Ecuador and Japan, back in 2016. Talinda said that she is ‘happy’ to share it with the fans. Dave Navarro recently revealed what happened to Chris Cornell and Chester Bennington.

Talinda got remarried after Chester’s death, but later divorced her second husband. Talinda has been an advocate for mental health in the near 5 years since Chester died by suicide in July 2017. Linkin Park have remained inactive since Chester died, only performing one tribute show in fall 2017 with Mike Shinoda focusing on his very successful solo career.

Linkin Park’s Mike Shinoda recently announced and sold off 5,000 NFTs of his ZIGGURATS musical collection. Each of the 5,000 items were designed by Mike, featuring graphics that were unique in their own way, and a musical clip.

The NFTs are all sold out, but he’s now put the music online to listen to anyway.

Explaining his idea, Mike said he wanted this to be a way of getting people into NFTs, while also making sure he was using the most green methods possible.

“So I designed this release to be an easy ‘first NFT,’” he explained. “There are multiple blockchains, this release is on Tezos. I chose Tezos because it’s a green blockchain, with one of the lowest carbon footprints of any popular chain. We’ve all bought an app we ‘own,’ like Microsoft Word, or a music plugin, or an item in a game. But those items are unlimited in number. The difference here is that the NFT is a limited edition, highlighting the value of authenticity, rarity, and originality.”