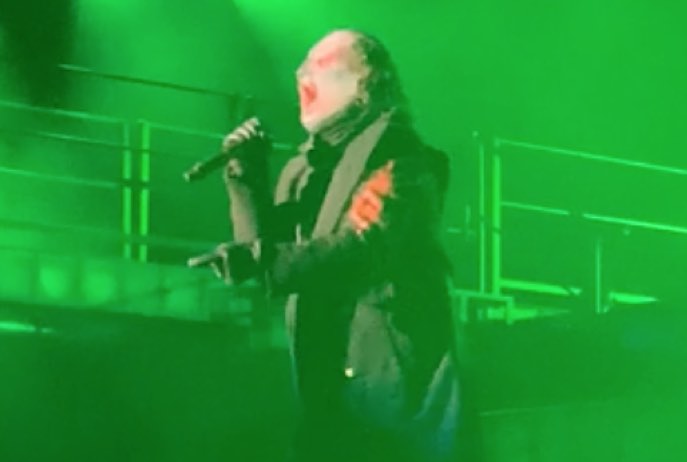 Corey Taylor temporarily ended a Slipknot performance in San Bernardino, California on Saturday night after EMT’s needed to get to fans due to a medical emergency. Alternative Nation transcribed what Taylor said at the concert. You can view the video below.

Taylor screamed onstage, “No one is f**king getting hurt on my f**king watch, do you understand me? Back the f**k up!”

mSTH95 wrote on Reddit, “Knotfest SB was crazy fucking good. Mosh pits were so fucking rowdy, crazy good but some chicks started to get trampled & have seizures. Corey got mad, he stopped the song because people wouldn’t stop moving to get EMT In.”

MalnutritionUSA commented, “Bro that was straight up insane at the start. During the huge push on the first song a dude went down near me and was passed out face down on the ground

Every time I pushed as hard as I could to get some room it instantly filled back up with people I was getting pushed on top of him too. I was seriously worried this dude was going to die down there. I’m pretty beefy and luckily there was another huge dude right there too but it still took both of us giving it our absolute everything, for probably a minute or so, he was going limp then waking up and going limp etc. the whole time hes just in a daze saying help me please help me please

Once we got him up he kept going back out of consciousness and almost falling back down, hauling that dude from basically row 4 from the rail all the way to the back was tough but we saved that dude.

There had to have been more too it was seriously sketchy at the start sounds like everyone went home ok though so I’m stoked.”

mSTH95 responded, “Dude for real! Same in my area! kids and females were on the ground (hurt or unconscious) while people were still running around over them! If Corey (Slipknot) hadn’t stopped the song it could of been worse. That opening song was fucking brutal in the pit!! At one point the rail was being pushed so hard that security had to hold it for it not to tip!”

MotherGlorious wrote to someone, “Were you the guy I ran and got the medic for? Had a almost catatonic guy come over the rail in the beginning being carried by another enormous guy and no one would leave to get a medic. everyone was just looking around at each other, so I had to fly out of there to grab a medic during Get This and it was gnarly.” Corey Taylor made a stunning Michael Jackson family claim last week.

Knotfest SB was crazy fucking good. Mosh pits were so fucking rowdy, crazy good but some chicks started to get trampled & have seizures. Corey got mad, he stopped the song because people wouldn’t stop moving to get EMT In. from r/Slipknot