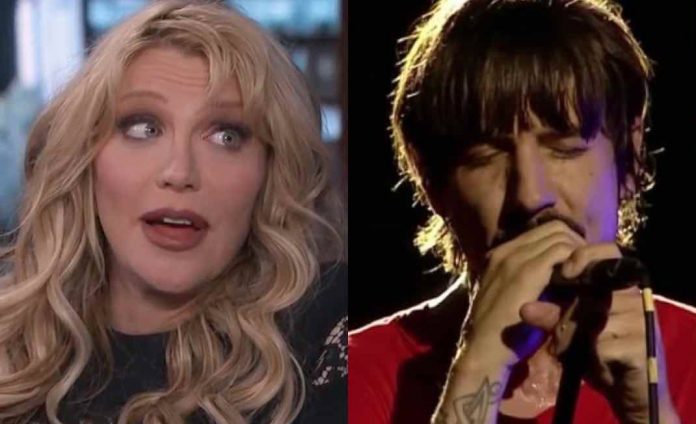 “Rip mark. You were a good friend to me & Kurt (even if in your book you wrote our close friendship out, I’m still baffled & so sad about that. But sigh. “market forces of sexism“ #. It is what it is. In #anthonykiedis’ book #scartissue despite us being roommates and hanging out ALOT & also in BED, for years previous to me begging Kurt not to kick @chilipeppers off the cow palace NYE 92 show due to @flea333- whose never sold me out – generosity being the reason hole could even rehearse – in “ #scar tissue” I first appear on Kurt’s arm? “whining“? Ok!

Go sexist “market forces“⁉️ You f**king dudes and your stupid f**king books. I’m finishing mine now so it’ll be riddled with lightning flashes of brutal truths & remembrances of all your little Weiners. So put your panties on cuz you’ll need them. I’m overtaking your bs books where I’m a “whiny“ adjacent of Mr Cobain period, personally)”

Nick Cave said about Lanegan, “I encountered Mark many times over the years — we engaged in some extremely dubious escapades back in the ’90s; he sang ‘White Light/White Heat’ and ‘Fire and Brimstone with Warren [Ellis] and me on the Lawless soundtrack; he recorded my favorite ever Nick Cave cover — an astonishing version of ‘Brompton Oratory’; we did something together for the Jeffrey Lee Pierce record, I think; and he toured and hung out with us on The Bad Seeds’ 2013 Australian tour. Go online and watch Mark sing Blixa’s ‘father’ part with me in ‘The Weeping Song’ on that tour.”

“But watch Mark, watch how he walks onto the stage, plants himself at the mic stand, one tattooed fist halfway down the stand, the other resting on top of the mic, immobile, massive, male. When the time comes to sing, he simply opens his mouth and releases a blues, a blues lived deeply and utterly earned, and that voice tears right through you, his sheer force on stage humbling.”

“A greatness, Mark, greatness — a true singer, a superb writer, and beautiful soul, loved by all. Love Nick.”