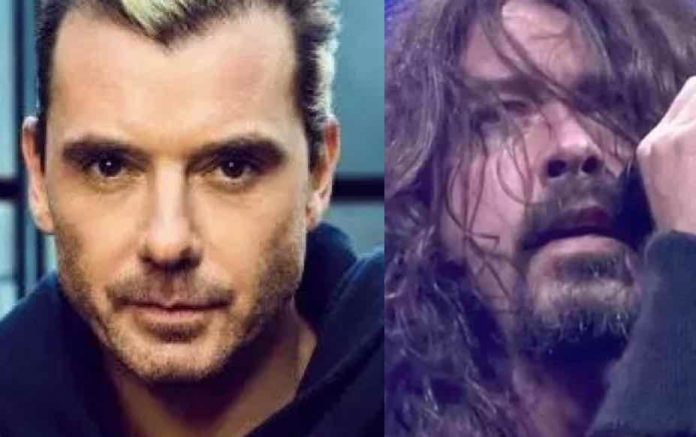 Foo Fighters frontman Dave Grohl revealed to High Life magazine that Bush singer Gavin Rossdale and No Doubt singer Gwen Stefani’s children went to the same school as his kids in a new High Life interview. Sadly, Gavin and Gwen’s kids are now living without their father in the home, after the couple got divorced a few years ago. Dave Grohl being disrespected right after getting off a plane was just revealed.

“True to form, Grohl can’t resist taking centre stage. ‘Gwen Stefani’s house is right there!’ he shouts. It really is the house that No Doubt built, Grohl attests. ‘My kids went to school over there with Gwen’s kids'” he continues, pointing across the freeway and to the white building dangling over the side of the cliff. ‘So, they would have play dates and go to this crazy house, which is like the Guggenheim. It’s insaaane.’

When you’re in LA, it’s best to get a local to show you around. But Grohl is no ordinary local. Hanging out with him is like socialising with a cartoon character – albeit one voiced by The Dude from The Big Lebowksi. ‘Rock’n’roll? It’s just an energy, man,’ is actually a sentence that comes out his mouth. ‘I’m a frustrated comedian,’ he laughs. ‘When you’re on stage in front of 30,000 people and you’ve had four whiskies, who knows what can happen? Those are the shows I love most.'”

BeastBoxGaming recently posted on the Foo Fighters Reddit, “Dave Grohl has all the respect I can give, but I disagree on what he said about Billie Eilish. He once called her ‘the next Nirvana.’ She is a talented musician, no doubt, but she is no Nirvana, not even close. Thanks for coming to my ted talk.”

FootieFighter responded, “He compares her being young and getting popular so fast with Nirvana and she has just like Nirvana at the time a sound that is new in popular music. So he compares her situation with Nirvana, not the person or the music.” Howard Stern recently made a bizarre Gavin Rossdale affair claim.