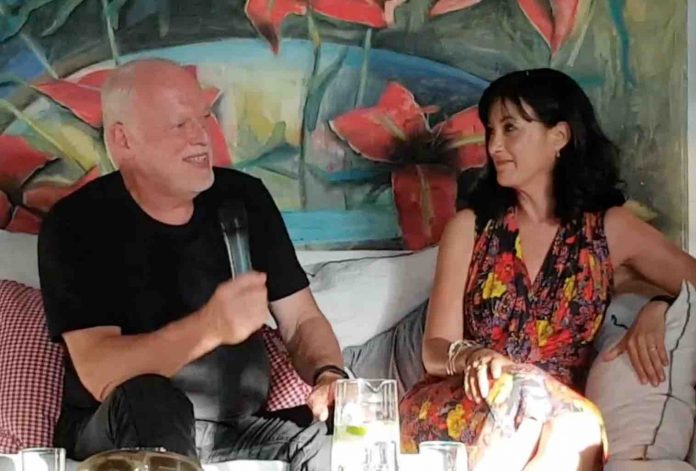 David Gilmour‘s wife, the incomparable Polly Sampson recently reached out via Twitter to offer her condolences to Catherine Mayer who recently lost her husband due to pneumonia. Mayer is the co-founder of the UK’s Women’s Equality Party and of the Primadonna Fest, which is an “inclusive literary, music & entertainment festival, giving prominence to work by women”. Samson tweeted: “Oh, Catherine. I am so sorry to read this. Your almost three decades of love is eternal.” Pink Floyd wife makes David Gilmour ‘sickness’ claim.

In other news regarding Samson’s husband, David Gilmour, fans recently took to social media to reflect upon one of Pink Floyd’s most successful albums of all time – ‘The Wall’. One fan proclaimed: ” What does one say in way of introduction to what is perhaps one of the finest and most popular albums in rock music. From the time of its original release, this album has been acclaimed as the most outrageous and most penetrating of the concept works ever released. I remember living in London in the 1980s and seeing the movie version of this at the time it premiered and being flabbergasted at the artful way in which the animators interpreted this mind-boggling take on Britain after World War Two.” Roger Waters claims David Gilmour ‘banned’ from Pink Floyd.

The fan also said: “It is a most amazing concept piece, and a study in the ways in which individuals feel crushed, isolated and left bereft of hope by the indifference, cruelty, and intolerance of modern industrial society. It is not so much a collection of individual songs as it is a thought piece that reverberates on a number levels of the artist’s consciousness, examining his innermost thoughts, hopes fears and experiences. It takes place in a surrealistic landscape, one that evolves as quickly as the changes in perspective shift and flow. Buy the CD, listen to it endlessly, and then go rent the video and watch it. It is a most provocative entertainment and a strange and emotional whirlwind ride through the orbits of an artist’s innermost ruminations. Enjoy!” David Gilmour’s wife ‘begs’ for Roger Waters reunion.

Oh, Catherine. I am so sorry to read this. Your almost three decades of love is eternal 💔