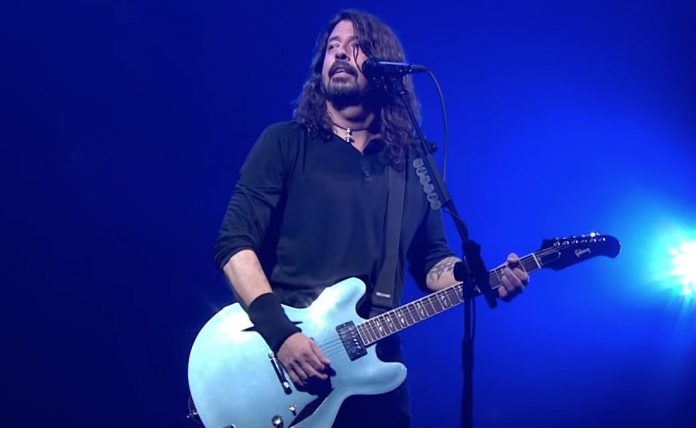 Dave Grohl and Taylor Hawkins recently paid a visit Sammy Hagar’s Rock & Roll Road Trip television show. They went on to reveal some interesting preferences of themselves in the catergory of drumming and some of their favorite drummers of all-time. Hawkins revealed that growing up Roger Taylor from the legendary and iconic band Queen was one of his heroes. Wolfgang Van Halen had previously reveals truth about Sammy Hagar’s albums.

“One of my heroes when I was a kid was Roger Taylor from Queen,” Hawkins revealed. “I always thought it was cool because he always sang a song on the records and he had the highest voice and had a big drum set, and I said ‘He’s cool, I wanna be like him.”

The one time Van Halen frontman had asked Grohl referring to Grohl’s time drumming for Nirvana. It has been previously reported that an ex-Foo Fighters member revealed who angered Dave Grohl.As Grohl plugged his ears and went “la la la” so he couldn’t hear anything, his Foo Fighters bandmate asked about that golden era for drummers. He also mentioned Smashing Pumpkins’ Jimmy Chamberlin and Matt Cameron, who’s played for Soundgarden and Pearl Jam. It is to be noted that, Smashing Pumpkins and Foo Fighters are scheduled to play multiple shows this year. The conversation prompted Hagar to ask both guys point blank who they think is the greatest drummer of all time.

After a bit of a laugh, to Hagar’s dismay, both admitted that Led Zeppelin’s John Bonham was “the correct answer”  The duo also performed an acoustic rendition of “The Sky Is a Neighborhood” off their 2017 album Concrete & Gold.