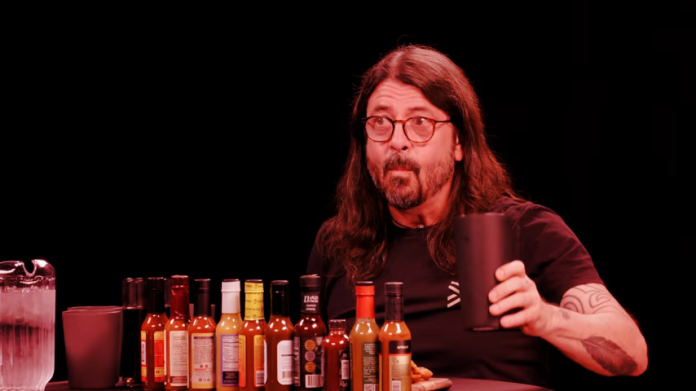 Foo Fighters frontman Dave Grohl recently joined YouTube hit series Hot Ones for an epic conversation. On a recent episode of the now hugely popular show, which brags having “the hot questions and even hotter wings”, Grohl joined the host of the show, Sean Evans. For those unaware of the concept of the show – the goal is to have the host of the show, Evans, ask his guest interview questions while they eat hot wings lavished in hot sauce that progressively gets hotter.

During the conversation, Grohl reflected on his experience of what it was like appearing on Saturday Night Live for the first time, and how he feels about appearing on Hot Ones.

“I gotta be honest. I’m not kidding dude. When I was a kid, I learned to love music watching Saturday Night Live and I walked onto that set for the first time in 1992 like, ‘Holy shit, I’m here” he recalls.

During the same conversation, Grohl revealed how he watched David Letterman’s show every night and also did ‘bong hit’ before he came on to the stage for his concerts. Here is what he said:

Showing his enthusiasm over getting the chance to finally appear on Hot Ones, Grohl stated, “For years I’ve watched this fucking show and I finally walked onto this set and saw those sauces and saw your face and was like, ‘Yes! Bucket list! Bam!’ The only thing I have left in my life to do is jam with AC/DC.”

It is understood that Grohl is a huge fan of the series, and spent some time recalling a bunch of his favorite moments from the show.