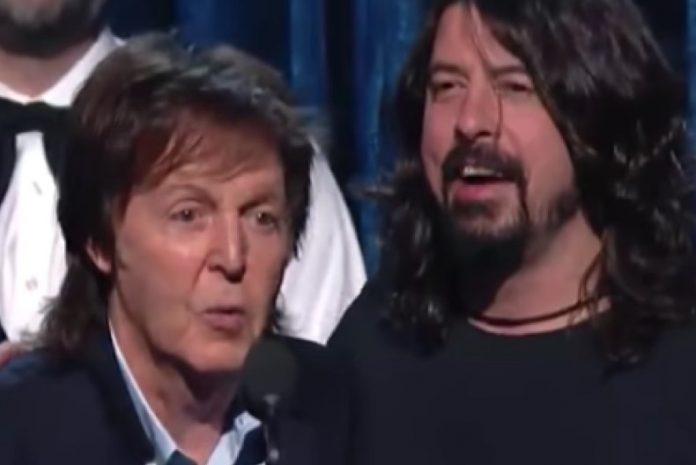 Dave Grohl, the iconic frontman of the Foo Fighters was a guest DJ on the BBC Sounds program: “Radio 2 Beatles”. Where he paid tribute to the fab four as only he could. Here Grohl discusses the Paul McCartney death rumor which was prevalent back in the 1960s and 1970s and still is mentioned to this day.  However, originally the urban legend began when a conspiracy theory and rumor suggested that iconic vocalist Paul McCartney died and was replaced by a look-alike. Slash’s son called out Dave Grohl’s fraud yesterday.

In September 1969, a rumor of McCartney’s death began spreading across college campuses in the United States, based on perceived clues found in Beatles songs and album covers. Clue-hunting proved infectious, and within a few weeks had become an international phenomenon. Dave Grohl told a funny restaurant fight story a few days ago. Rumors declined after an interview with McCartney, who had been secluded with his family in Scotland, was published in Life magazine in November 1969. You can view Grohl’s comments below.

Dave Grohl: This next song is from the magical mystery tour record. It was released in 1967. I Am The Walrus sparked a lot of controversies and fueled the conspiracy theory that was Paul McCartney’s death and replacement with a Paul McCartney lookalike. When people listen to this song that theory is only fueled by the lyrics but when I listen to this song, I listen to the subtle nuance of the brilliant engineering that went into making this record.

Grohl: From the awesome floor tom overdub towards the end to the studio panning left to right, I feel like they were inventing modern recording techniques every time they hit record. So, if you have a key near and left to right balance knob just to the left to right so you can hear how they were panning these instruments side to side.