Tool guitarist Adam Jones revealed that a drummer from a big name band rejected possibly joining Tool after speaking on the phone with Maynard James Keenan, as he no showed a rehearsal, leading to Danny Carey joining. Jones made the remarks on Talk is Jericho, and Alternative Nation transcribed his comments. A Tool member hinted at a major 2020 release yesterday.

Jones said, “The point is when we started Tool we weren’t trying to get signed. It was really hard finding other people to jam with, because like I said, when you would look through the listings it was like, ‘I’m into Ratt, I’m into this, I’m into that.’ We kept jamming with guys who were very pretty, with hair spray hair up to here, really nice jeans tucked in, cowboy boots. I’m not making fun of it, but that was just the era, and we just weren’t connecting.”

Tool’s producer revealed a Maynard James Keenan bedroom recording secret a few days ago. He later added, “Maynard called me and went, ‘Hey, the drummer from Autograph is going to jam with us.’ I’m assuming it’s him, and we were really excited. So we were jamming at Danny’s studio, and that’s where the Green Jello People would play, and Danny let us jam there, and the guy blew us off, he didn’t show up. So we had been asking Dan to jam with us, and he was like ‘no’ so many times.

We were like, ‘Dan, come on, this guy blew us off. Just walk into the next room.’ He said, ‘Alright, I’ll do it one time.’ He jammed with us, then he was like, ‘Hey, we should do this again.’ It was really incredible.” Tool’s producer recently revealed who Greta Van Fleet ripped off. 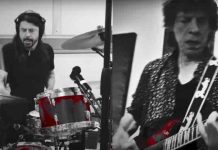 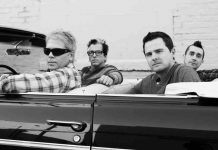