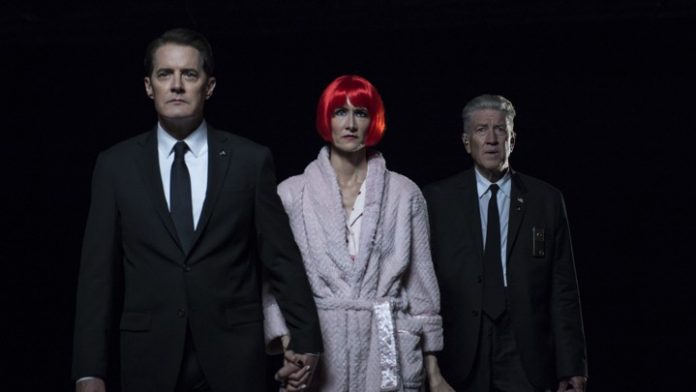 Consequence of Sound reports that at a recent book event, David Lynch hinted at inspiration hitting him to create more Twin Peaks, and to continue the story of Carrie Page following Season 3’s cliffhanger ending.

Lynch and his book co-writer Kristine McKenna discussed their new memoir, Room to Dream, at the Ace Hotel in Los Angeles last night. According to one attendee, a fan asked him whether he would ever be interested in continuing the story of Carrie Page, to which he curiously replied, “It is calling, but there are a lot of disturbances.”

Lynch’s new book describes Twin Peaks Season 3 negotiations with Showtime according to Variety. Back in 2015, Lynch and his Peaks partner, Mark Frost, met with Showtime to discuss bringing back their iconic murder mystery before the show’s longtime executive producer, Sabrina Sutherland, had come up with a proposed budget for the revived series. The quote was, apparently, more money than the premium cabler had in mind; as Lynch described it, “everybody freaked out.”

“They were realistic numbers, but Showtime thought the budget was stupid high,” Lynch wrote. “I hadn’t made anything since Inland Empire and nobody went to see that, and you could tell they were a little bit like, ‘Yeah, we want to do this, but we don’t know if we can go with the money you’re asking for. And this business of more than nine episodes? We definitely don’t know about that.’

“Then, when I saw the budget they were offering, I said, ‘Fuck this,’ and then they made another offer that was worse than the bad one they’d already made!” Lynch continued. “I said, ‘I’m fuckin’ out! If they want to do it without me I’ll probably let them, but I’m out,’ and I felt a tremendous sense of freedom mixed with sadness when I made the decision.”

A month later, Lynch and Sabrina Sutherland met with Showtime execs again, with a much better result.

Lynch and Sutherland subsequently composed a list of everything they would need to make the series the way they felt it should be made. Then Lynch gave Sutherland her marching orders—as he recalls them, “O.K., Sabrina, you’re gonna go in there in say, ‘This is not a negotiation. If you want to do it, this is what it takes.’ If they start quibbling about stuff, say thank you very much and stand up and leave.” Thankfully for Peaks fans everywhere, there was no such quibbling—and 18 episodes, several deep-fried guns, and one blood-curdling scream later, fans got a revival they will likely never forget.

Tonight at The Theatre at Ace Hotel, David Lynch was asked if he’d like to continue Carrie Page’s story. His answer sent chills down my spine: