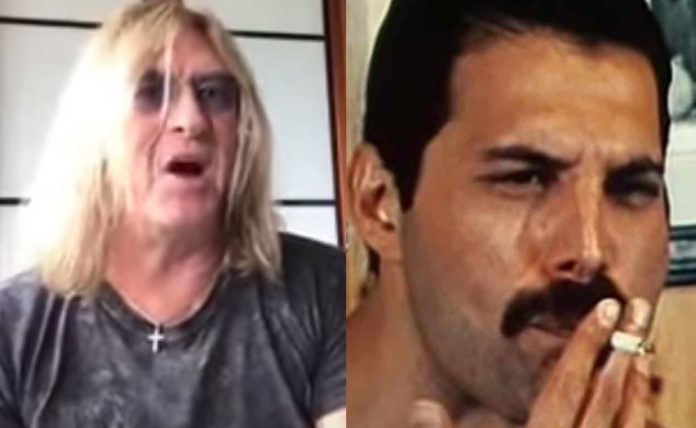 Freddie Mercury bandmate and Queen guitarist Brian May revealed made a new post about Def Leppard singer/guitarist Joe Elliott aging in a new Instagram post. Def Leppard’s Vivan Campbell also revealed that his ‘big reveal’ as a new member after keeping it secret was at the AIDS tribute show for Freddie Mercury. Freddie Mercury screaming something bizarre at his boyfriend in bed recently resurfaced.

Campbell mentioned Freddie Mercury when asked by Rock Talk with Mitch Lafon about Def Leppard’s Las Vegas residency, “This show’s going to be a bit more of a career retrospective. There’s going to be some very new material that we’ve never played before as well as some very old material. There’s a song we’re working on today that I think I played with the band once in a club in Dublin, which was my very, very first time on stage with Def Leppard, and it was a couple of days before the [1992] Freddie Mercury AIDS awareness [tribute concert], which was the big reveal.” A Freddie Mercury bandmate revealed the ‘saddest photo ever’ last week.

He added,” I think that was the only time we played this particular song, so, you know, it is more of a career-retrospective show. We are going to try to have a part of the show that will be more intimate. Not quite acoustic, but we’re going to strip it down and focus on the vocal aspect of the band. It’s something that we’re pretty well-known for — being a hard rock band with really strong vocals, but to put it in a more intimate setting so we can make that be a focal point of the show as well.”

Queen are currently on tour with Adam Lambert. Brian May wrote on Instagram a few days ago, “WOW ! Thanks Washington DC for taking us to your hearts tonight. And thanks @lunawest, @jaimethemiracle @shellstar79 for the pics. With love from me and my cyborg. Bri.” Queen were called out for a terrible Freddie Mercury mistake a couple of days ago.