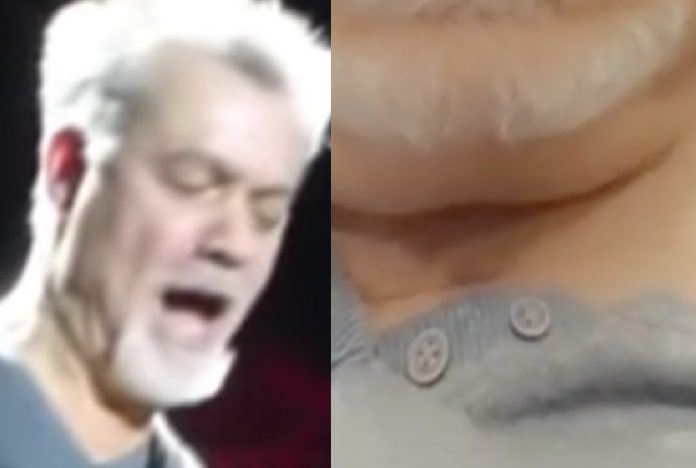 Eddie Van Halen has released a new Halloween video where he digitally manipulated his face to look fat with creepy bugged out eyes and bad teeth. Eddie is definitely maintaining his great sense of humor despite reports that he is battling throat cancer.Eddie Van Halen’s family called an A-list name a rapist pedophile yesterday.

Radio host Eddie Trunk recently made a remark about how Eddie Van Halen’s sickness could be ‘worse’ than cancer news already out in the public. Destructo3 responded on VHLinks.com, “Trunk is a Fan with a microphone. Nothing more. It’s killing him he knows no more than us. That was hard to listen to. What 5-10 minutes of bitching about him not being in the know on this issue. I have no personal vendetta with the guy, but man is he obsessing over something he has zero objective information about.”

EJC responded, “Eddie Trunk sure likes to make a point of letting everyone know how long he’s known Frankie Banali. I got it after the 3rd or 4th time…

[I’ve known ________ forever.’ The premise of every Eddie Trunk story. I was hoping to get some breaking news on Bang Tango or Faster Pussycat….I don’t know why everyone always thinks they are ENTITLED to know about someone else’s health situation. My own father was in the hospital 8.5 years ago with a heart issue that he eventually succumbed to, and neither he nor my mother let me know because that’s just how they were.

They wanted privacy, even from their own children. So I certainly wouldn’t feel ENTITLED to know someone else’s heath situation because I like how they play guitar. And Trunk is just looking for hits on his sites… It’s no different than some people use Facebook and post every detail of their lives on it, and some of us (like me) have never had any sort of social media profile ever.” Eddie Van Halen’s family revealed sad Michael Anthony photos recently.