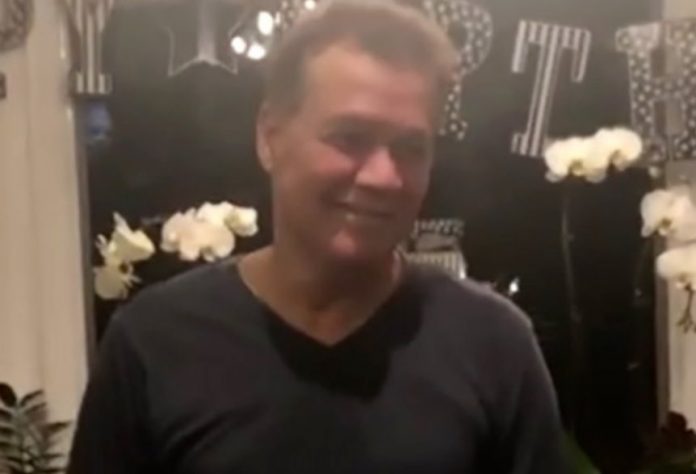 Eddie Van Halen‘s wife Janie has revealed a photo about pursuing ‘terrifying’ and ‘amazing’ things. She wrote, “If it’s both terrifying and amazing then you should definitely pursue it.”

David Lee Roth confirmed yesterday that Van Halen is ‘finished’ after over 40 years, and that it’s his job now to carry on the legacy, adding that Eddie Van Halen has a ‘story to tell.’ Michael Anthony recently reacted to horrible rumors about Eddie Van Halen’s health.

Little Dreamer posted on VHLinks.com about the end of Van Halen, “It’s pretty sad to see that Dave WAS indeed under a ‘gag order’ since 2006 and is only free to talk now. Ed and Al are my heroes, but it’s very upsetting to see they were running the band like a Soviet-style dictatorship. I don’t believe you can be creative when you have this type of vibe in a band.

I do get a bit of anger in Dave, over how things transpired. First of all knowing Ed and Al, no way in hell they would ‘give’ VH to Dave. That’s pretty much a non starter right there. With the other interview he gave recently, laying claim to some VH stuff, it seems to me more like the VH bros are preparing yet another move, maybe with a 4th singer, and Dave is claiming the VH mantle because he sees his place being challenge. He’s going on the offense as the best defense. That’s the vibe I’m getting.

If VH was truly dead, there would be more sadness in his interviews, more remembering the good times. He’s a bit pissed off. Something’s cooking and he doesn’t like the smell of it.”

I’d say the book is closed now. The fact that Ed did next to no promo that wasn’t gear related the whole time and Dave did tons, showed who was into this and who wasn’t. They did it, we did it Time for something else now.” Eddie Van Halen’s wife recently revealed a scary hospital video.