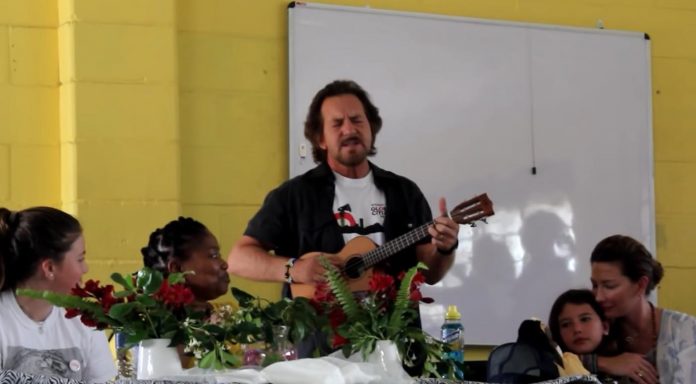 Pearl Jam frontman Eddie Vedder performed The Beatles classic “Here Comes The Sun” at Walmer High School Choir a week ago after 14 years. Vedder was joined by his wife Jill, and daughters Olivia and Harper Moon. You can watch video below. Vedder released The Molo Sessions in 2005, which featured him performing with The Walmer High School Choir.

molosessionsfans posted, “05 December 2018 – After 14 years a beautiful reunion between Eddie Vedder and the Molo Choir. Thank you so much to Eddie and his family for taking the time to make this amazing day possible. #molosessions #walmerhighschool #portelizabeth #sharethebay.”

Vedder recently performed live in Africa for the first time at the Global Citizens Festival. Vedder was joined by the Soweto Gospel Choir, and he performed “Porch”, “Long Road”, “Better Man”, and “Imagine”. “Long Road” was dedicated to his brother Chris (not Chris Cornell as fans originally though according to an Instagram post by Jill Vedder) and Nelson Mandela.

He discussed how opening for Beyonce and Jay-Z is a ‘dream come true.’ Alternative Nation transcribed Vedder’s comments.

He said, “We’re going to sing a bit of a prayer for you. It’s an honor to be here, and for someone who has never played in your country before, it’s a dream come true. It’s also a dream come true to open for Beyonce and Jay-Z.

Something we don’t always think about, and I’ve been thinking about it a lot. I just want to mention our gratitude for the family members of Nelson Mandela. For him to be the father of this country, they had to sacrifice their own father, their own grandfather, their husband, because they shared him with the world, he was able to change the world. We appreciate them for sharing him with us.”