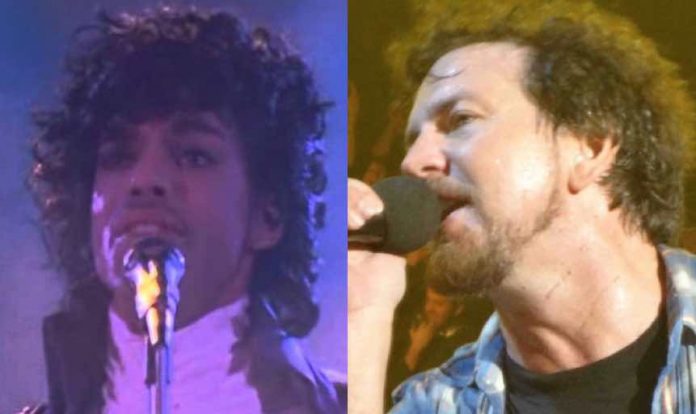 Pearl Jam frontman Eddie Vedder covered the Prince classic “Purple Rain” with Red Hot Chili Peppers in Los Angeles on Saturday. Liam Gallagher mocked Vedder a few days ago. Pearl Jam teased “Purple Rain” at a show in April 2016 after Prince died, but it was only a part of it, so this is the first time Vedder has sang it live. Red Hot Chili Peppers have covered the song before, with Josh Klinghoffer singing.

Pearl Jam Online reported, “After performing a few days ago in Las Vegas, Eddie Vedder took part in a tribute to the Silverlake Conservatory of Music Benefit, founded about twenty years ago by Flea , the bassist of the Red Hot Chili Peppers.

After a short set of Red Hot Chili Peppers , Eddie took the stage and played – among the various songs – Society and Corduroy in the company of Josh Klinghoffer (the current RHCP guitarist), while for Better Man and Hard Sun the singer of Pearl Jam was accompanied by the choir of the Silverlake Conservatory.

In the encore, Eddie was joined on stage by the Red Hot Chili Peppers with whom he sang Prince’s Purple Rain and duet with Anthony Kiedis on Bob Dylan’s All Along the Watchtower.”