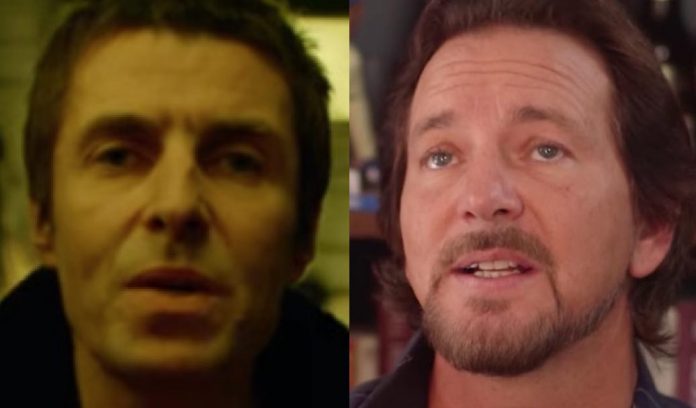 Former Oasis singer Liam Gallagher poked some fun at Pearl Jam frontman Eddie Vedder on Twitter recently, saying Vedder had the privilege of meeting him, and not the other way around. A Pearl Jam member was ‘insulted’ at the Rock and Roll Hall of Fame yesterday.

A fan named Alan asked, “Last year you told me you once met Eddie Vedder. Do you remember in which circumstances that was?” Gallagher responded, “He met me, let’s get it rite.”

Fans on the Pearl Jam Ten Club boards weighed in on the tweet. Jammalambo posted, “I like Liam Gallagher from that Shameless TV show. The other one from that shitty Oasis band is pretty annoying and full of himself. Let’s get it “rite”, Liam, but you just suck.”

A huge rumored Pearl Jam 2021 tour was recently revealed. CP3Iverson said, “He’s like Axl. Some people get the rock n roll punk attitude and they love it. Others get offended by it. He’s already told people that he’s joking 99% of the time on Twitter and he always speaks his mind. He’s also the first to tell anyone that ‘he’s not a writer. He’s a kickass frontman.’ Love that he made a great comeback album. His MTV Unplugged last month was unbelievably good too.”

Gold Rush posted, “When Pearl Jam headlined the Big Day Out festivals in Australia in 2014, Beady Eye were also on the bill. PJ were great. Beady Eye were fucking awful.”

Liam Gallagher has opened for The Who recently, while Eddie Vedder has made guest appearance onstage with The Who in Seattle and Vancouver, performing “The Punk and the Godfather.” Liam Gallagher mocked a Smashing Pumpkins tour earlier this year.