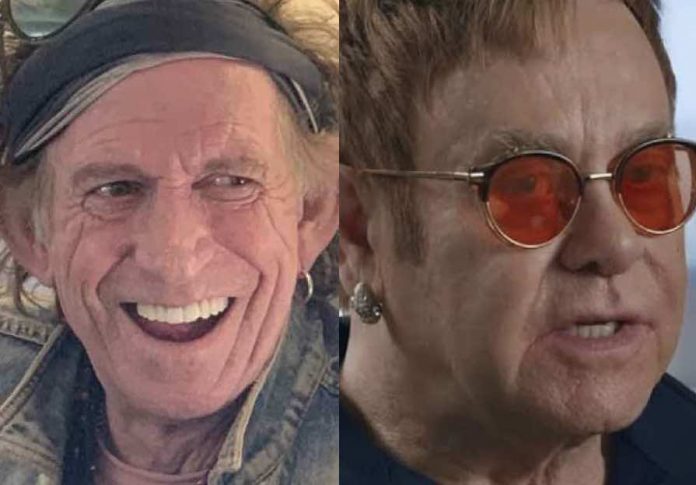 Elton John called The Rolling Stones guitarist Keith Richards ‘pathetic’ and insulted his looks in his new book, and also mocked him by saying he has arthritis. Keith Richards was also just accused of ‘drunk driving’ by a big name.

Flilflam posted on IORR.org, “I am now about two thirds of the way through the book Me Elton John, by Elton John. Already I have heard Elton say at least three negative things about Keith. While Elton was often stoned on cocaine and alcohol, he complained of Keith being so stoned one time that he could hardly move.

He said Keith was very upset that Lion King had outperformed Voodoo Lounge in terms of sales. He also said he looked like a monkey with arthritis, certainly a crude thing to say since no one can help the way they look. Elton seemed to justify his behavior by saying Keith had criticized him, apparently a lot. What is behind all of this silly bickering?”

Elton John had previously said, “It would be awful to be like Keith Richards. He’s pathetic. It’s like a monkey with arthritis, trying to go on stage and look young. I have great respect for the Stones but they would have been better if they had thrown Keith out 15 years ago.”

Wonderboy said on IORR.org, “I think Elton once guested at a Stones show — was supposed to sit in for one song but stuck around for more, which angered Keith. I read that Elton later apologized saying he was out of it at the time.

I would guess that Elton’s animosity comes from having cleaned up his addictions and being irritated that Keith continued on. As for Keith — well, the ‘dead blondes’ comment was funny, and spot on. I believe that Mick did his best to keep Elton from taking Keith seriously.” Keith Richards using heroin was a famous model was recently detailed.