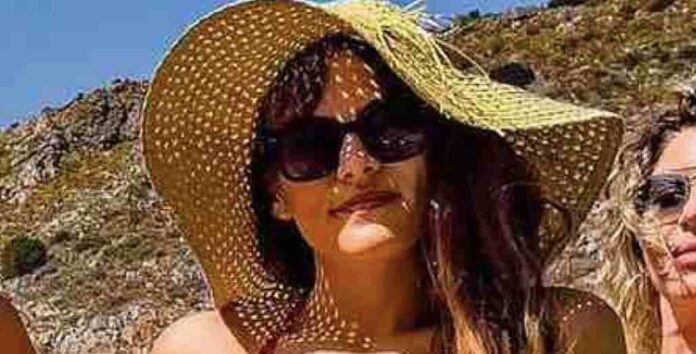 Riley Keough, who is the daughter of Lisa Marie Presley, posted a photo on her Instagram in celebration of reaching the end of filming her latest TV-mini series. Elvis’ granddaughter is doing all that she can to make a name for herself in the entertainment industry and she is doing extremely well at it as well.

Recently, Riley was seen by the masses as she posed in a red bikini on a beach in Greece, where Daisy Jones And The Six officially ending their filming. The case all felt that, in unison, that the filming was a success.

Reese Witherspoon is also noted to be one of the executive producers of the Amazon Prime show. Reese now as her own production company as well called ‘Hello Sunshine’, which is also part of the project.

This isn’t the only big news for the Presley family as they made history on Tuesday as they were immortalized with a coveted Hand and Footprint ceremony outside the TCL Chinese Theatre in Hollywood.

Three generations of the famous family including Priscilla, 77, her daughter Lisa Marie, 54, and her own daughter Riley, 33, as well as her twins Harper and Finley, 13 – were seen side by side a the lavish event before placing their hands into the cement.

Also in attendance was Austin Butler, who plays the legendary rock star in the new biopic  Elvis, and the film’s director Baz Luhrmann.

All of the news for Elvis and his family has been coming in extremely quickly as the film with his namesake is currently tied with ‘Top Gun Maverick’ at the box office. There has been a lot of talk about how good the movie is and ratings are torn between love and hate for the film, but it is still in the infant stage in the box office, so we will see how this does in the coming weeks as we hope the film doesn’t shape up to be an embarrassment.