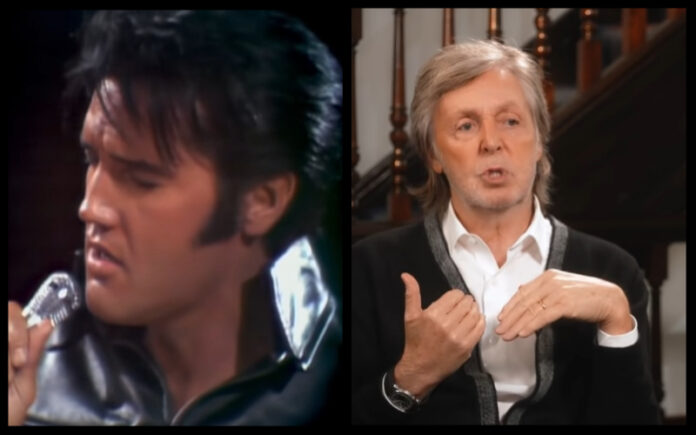 Fans of Elvis Aaron Presley and music aficionados across the universe are flocking to see the latest bio-pic of ‘The King’. The latest film, entitled simply, ‘Elvis’, covers Presley’s rise to fame to his unprecedented superstardom. In addition, it touches on the complicated relationship with his enigmatic manager, Colonel Tom Parker, who is played by Tom Hanks, over twenty years in the film. Central to Presley’s journey and happiness is one of the most influential people in his life, Priscilla, who is played by Oliva DeJonge. Recently, this A-list rocker discussed about the death of Elvis.

One individual who surely would have an interest in seeing the film is The Beatles icon and co-founder Paul McCartney as he, along with his bandmates met Elvis in what was considered a significant moment in music history. This would take place on August 27, 1965, at the invitation of Mr. Presley himself.

However, as the legend goes, after sitting in silence for a significant amount of time, Elvis would state: “If you guys are just gonna sit there and stare at me, I’m gonna go to bed!” Apparently, they ended up playing pool together and even had a jam sesh.”

More importantly, during this time, The Beatles were getting tired of performing on the road and doing live shows on a regular basis. So during an edition of The Adam Buxton Podcast, McCartney would state how in 1966, right after their final show at Candlestick Park in San Francisco, California, Elvis himself came up with a solution for that very unique problem. Credit to Express for the following.

“It was wet, it was raining, we were stuck on some little tin pot stage in the middle of this great big baseball arena. We couldn’t hear ourselves, we weren’t having any fun. And then to add to the indignity of it all, we were driven away in the back of a steel-lined meat wagon.”

McCartney continued: “And what happened was we’d heard that Elvis Presley had sent his gold-plated Cadillac out on tour. He didn’t go with it, he just sent it out! And people would flock to see Elvis’ Cadillac. And then it would go to the next tour and those people would flock.”