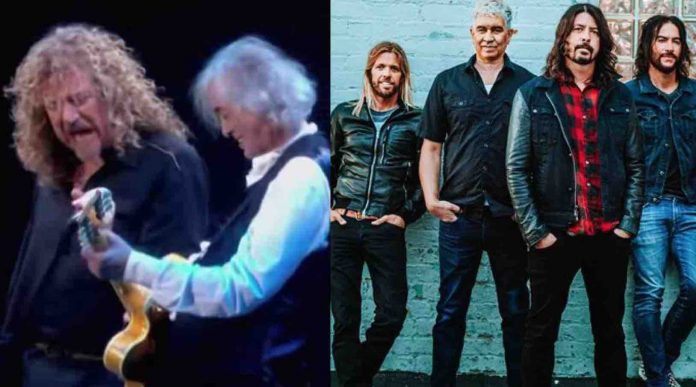 Foo Fighters drummer Taylor Hawkins called Led Zeppelin and everything that came after The Beatles a ‘copy’ in a new Mojo magazine interview. Foo Fighters made a stunning Michael Jackson claim yesterday.

Hawkins said, “They just did it all. Ringo [Starr]’s such a great drummer, George [Harrison] was like the first [Jimi] Hendrix, the best guitar solos ever written, every one of them was just like a prototype.

Any kid wanting their first rock records, they’re all you need to know about rock n’ roll right here. Everything that comes after is a pretty good copy – Zeppelin, everyone!”

A Led Zeppelin icon recently rejected a big name replacement singer. Producer and engineer Barrett Jones of Laundry Room Studio has worked with Dave Grohl since he was a teen, and he revealed in a new Foo Fighters Reddit AMA if he knew the debut Foos album would be a hit when he first heard it prior to its release.

LaikasDad asked, “I’ve always wondered if the bands (or producers) know when they have a guitar riff or beat that is definitely going to make an amazing song (or a lot of money). Can you sometimes tell right away? For example Seven Nation Army, they must’ve known when they first heard that guitar that it was going to be special. Thanks.”

Jones responded, “Even if you ‘know’ something is great doesn’t always mean it will find an audience. I’ve recorded a bunch of records that should’ve been big but for one reason or another it didn’t happen. That being said, I ‘knew’ that Nevermind would be huge when I went to the studio while they were recording it, and I ‘knew’ the first Foo Fighters record would be big as well. Same with Presidents of USA.” Dave Grohl released an emotional Billie Eilish cover last week.