CHICAGO — Chicago police released a photo Tuesday of the man suspected of sexually assaulting a woman during a concert at Wrigley Field.

The incident happened around 9:30 p.m. Sunday during a Foo Fighters concert. 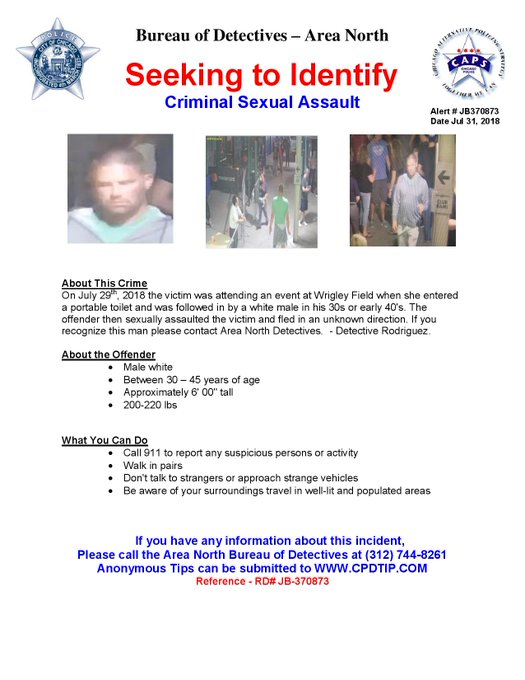 Detectives are seeking assistance identifying this wanted offender in a July 29 sexual assault at a Wrigley Field event. The offender is described as male white between 30-45 years of age, approximately 6’00 tall, 200-220 lbs.

Police said the 23-year-old woman was standing in a line for food when a man groped her. The woman left the line to use a portable toilet and before she could lock the door, the man followed her inside and sexually assaulted her. He then fled the scene.

The Chicago Tribune is reporting that the attacker grabbed the woman by her neck and hit her head against the wall of the portable toilet. She was later taken to a local hospital.

The man is described as a white male with a shaved head, between 30-45-years of age, about 6-feet tall and approximately 200-220 pounds. Photos of the suspect were released after detectives checked video in the area.

Police are urging anyone who recognizes this man to please contact Area North Detectives at: (312) 744-8261