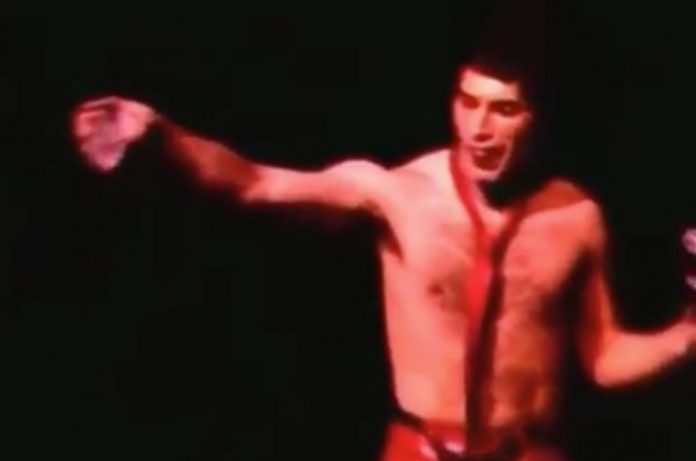 Freddie & Olivia getting “Physical” backstage at the Los Angeles Forum in 1980 😏.

P.S. Look at that wide smile on Olivia’s face as she has Freddie’s arm on her shoulder…I don’t know about you but I would love to have seen these two do a duet of Grease’s “You’re the One that I Want”… Their voices would have complimented each other beautifully and I’m sure Freddie would have made a perfect Danny Zuko with his hot leather jacket look and all 🔥😍🔥. The guy in the back though.”

Elton John feeling ‘threatened’ by his boyfriend working with Freddie Mercury was detailed earlier this week. Queen guitarist Brian May wrote yesterday as the band arrive in New York for the Global Citizen Festival in Central Park with Adam Lambert, “Hello New York City. Beautiful Big Apple. Sunshine !!! Big mountain to climb !!! 💥💥💥💥 Oops ! That giant spike straight ahead is NOT the World Trade Center One building, which stands close to where the beautiful Twin Towers used to preside over the South end of Manhattan Island.

It’s the EMPIRE STATE BUILDING !!! Apologies ! And thanks for the corrections folks including my pal Sal. We’re here in NYC to rehearse and play the Global Citizen event in Central Park this Saturday. See ya there ! Bri.” Freddie Mercury having an ‘intense’ date was recently revealed.