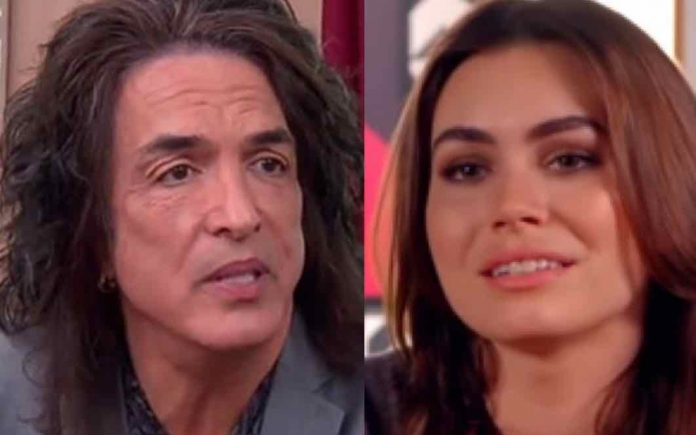 The party took place on the road, as KISS are currently on their critically acclaimed End of the Road tour. Mr. D wrote a review of Sunday’s show in St. Louis on the KISSfaq.com forums, “Fantastic show. The crowd was huge and pumped. Everyone from the the family behind me, a MOM and dad in their 50s with their 25 year old son all attending their first ever KISS show to the guy next to them attending his 36th. So many wearing KISS T-shirts from years past and lots of face painting with several in full costume. It was a great sight to see and pumped me up as well. I even enjoyed Garibaldi more than I thought I would. The band was great, especially Gene.

I think he could do this forever as he seems to enjoy this role so much. All the nonsense I put myself through the past year being pissed off about the lip syncing and planning to sit this one out left as soon as the lights dimmed and the curtain dropped. Yes I knew it was happening and even watched intently to try and confirm but ultimately, it didn’t effect my enjoyment of the show. The merch was awesome but I drew the line at spending $50 for a tee shirt so just went with the tour book. I did snag a bootleg shirt for $20 on the way out. I was so glad that I went which was my 14th and last live KISS show.”

Gene Simmons’ daughter was recently stunned by a family health scare. atowntommy wrote about the St. Louis show on KISSfaq.com, “I went and was glad I did. This was the second show I’ve seen this year. When I left the show earlier this year, I knew I still wanted more KISS. Yes, they are not 25 anymore. Yes, there are elements of the production that are canned. So what?

The Who has been playing Baba O’Riley for almost 50 years. It’s show business. If you want a serious virtuoso performance, go see your local chamber orchestra.

Anyway, the pods, the videos, the sparklers, bombs and all the rest make a for freaking fun night of spectacle. I’m kind of disappointed that I didn’t make things happen for the Indy or Cincy shows. I’m hoping there’s a 3rd leg/Lost Cities thing and I can hit Dayton or Knoxville or whatever. So. Much. Fun.” Gene Simmons’ daughter was recently photographed sitting in mud.