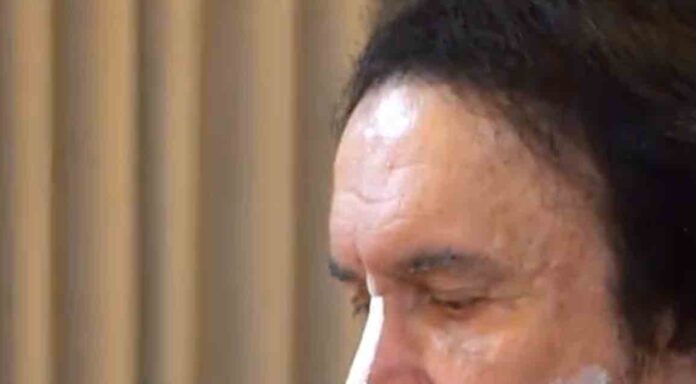 Kiss bassist and vocalist Gene Simmons dons the iconic face paint look while performing at the live concerts. He was recently seen applying the makeup on his face prior to the June 7 concert at AccorHotels Arena on the band’s ongoing “End Of The Road” tour.

The clip is part of a report from Sarah Abo of Australia’s “60 Minutes” who was invited by Simmons and fellow Kiss co-founder Paul Stanley for a taste of their jet-set lifestyle and to show her how they’ve survived and thrived in a notoriously fickle industry. The “60 Minutes” report on Kiss’ farewell tour airs tonight (Sunday, June 12) on Australia’s Nine.

As soon as the war paint goes on, @genesimmons and @PaulStanleyLive’s alter egos come out. Even though they’re now in their 70s, they’re still something to behold up close. #60Mins pic.twitter.com/TXfSF756jc

It was back in a 2016 interview with The Press-Enterprise, when Simmons had said that he spends two hours on his makeup alone every night. He creams his face with what he calls a white clown foundation. Then, he takes a black eyeliner pencil and stipples the design around one eye and connects the dots.

Next, he outlines a widow’s peak. “The most difficult part is to mirror what we see on the opposite side,” he said. He refines the lines with Q-tips. He uses a brush to fill in black paint around his eyes, widow’s peak and mouth. He sets everything with powder patted with a shaving brush. “You can’t make a mistake. You’re fixing, fixing and redrawing,” he said.

Kiss launched its farewell trek in January 2019 but was forced to put it on hold last year due to the pandemic. “End Of The Road” was originally scheduled to conclude on July 17, 2021 in New York City but is now expected to last through early 2023.