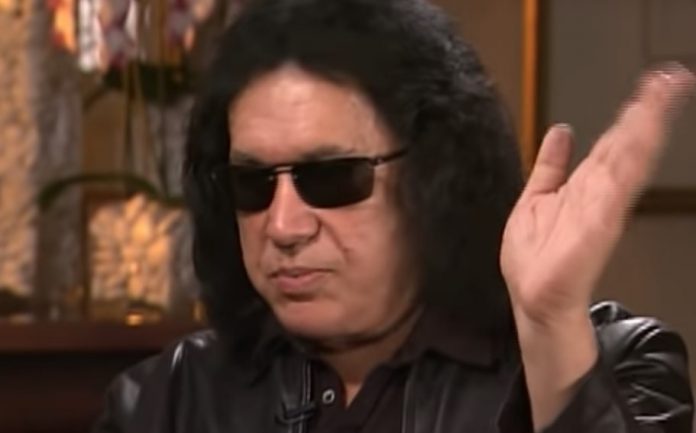 KISS legend Gene Simmons revealed during a recent POLITICO live talk that sadly without money, bands will go out of business.

Simmons said he felt quite comfortable rubbing elbows with the financiers attending the POLITICO conference.

“We’re the same. There’s only one business on Earth. Either you make money or you’re out of business. Whether it’s POLITICO or the church or a rock band, it’s all the same. The bankers wear their costume. I wear mine. The pope wears his. But without money, we’re all out of business. It’s the same thing.”

He also said that money is is no way evil, and any ‘fool’ who disagrees should give him their money.

“Whoever said money is the root of all evil, lied. And if you meet anyone who says more money more problems, please give them my number – I’ll relieve that fool of every dollar he doesn’t want.”

During an interview earlier this week on Strahan & Sara, KISS frontman Paul Stanley spoke about the inspiration for his book Backstage Pass.

“The problem with friends often is when you’re in a crisis or you’re having a problem, your friend says to you, ‘If I were you, I would…’ And that turns me off immediately, because you’re not me — you’ve never lived a day in my life and you don’t have my history,” Paul said (see video below). “So, I think that we can lead by example.

“Basically, what the book is, is me talking about experiences I’ve had, crises I’ve gone through, problems I’ve had at home and how I dealt with them,” he continued. “So maybe somebody can get a little bit of insight, a little bit of enlightenment from what I’ve done.

“I think the best advice we can give people, if we’re gonna give any, is to tell ’em how we’ve dealt with things. And the bottom line is, no matter who you are, no matter how rich, no matter how famous, the truth is that the people that you look up to and that you see in the star system are no different than you. So I believe in peeling away all the secrets that I have. It makes me free, and it also lets people out there know that we’re all, basically, dealing with the same issues.”

" There's only one business on Earth. Either you make money or you're out of business. Whether its POLITICO or the church or a rock band, it's all the same." pic.twitter.com/NLdYSQRnWi