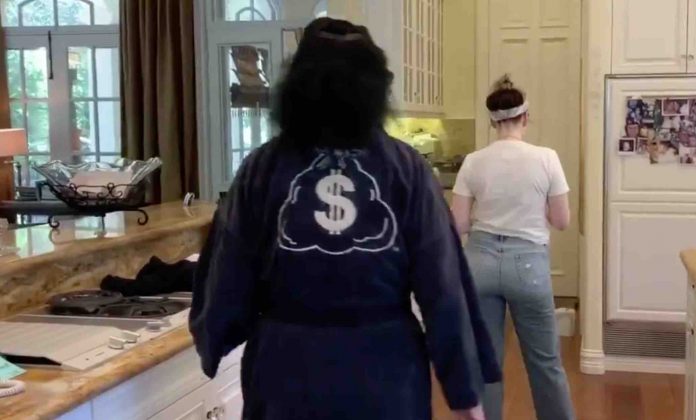 KISS icon Gene Simmons’ wife Shannon has released a hilarious video where she dresses up like a man: her husband! In the video, created for Gene’s 70th birthday, Shannon wears a black wig and a Gene Simmons money bags jacket. She also makes breakfast, and goes around incoherently rambling as Gene.

Gene Simmons wrote about the video, “This is my beautiful wifey Shannon impersonating yours truly…I never realized how good looking I actually am!” Gene Simmons creepily went into character as ‘The Demon’ when partying with his daughter and son in a photo over the weekend.

Ferdinand Cesarano wrote in a KISSFaq.com forum review of a recent KISS show in Brooklyn, “Here are my thoughts on the show, which was my first time seeing Kiss in fifteen years, and, I think, my ninth time overall (if I include Paul Stanley in 1989, which I do).

Not having gone to an arena show for decades, I had asked several people whether any advancements on concert sound in sports arenas had been made; and those people said that such advancements had been made. So I went in hoping for sound that moved **a little** towards the level of sound that one could find in a theatre. The last time I saw Kiss was at the Jones Beach Theatre in 2004; and the first time was twenty years before at Radio City Music Hall. These are places that were built for music; and it shows.

But, no such luck. The sound was as I remembered from my arena concerts in the 1980s and 1990s, which is to say: not very good.

Fortunately, that applied mainly to the instruments; the vocals were crisper than I had expected. While it has been [rumored] that Paul is doing some degree of lip-synching, he is not lip-synching the whole show. For ‘Love Gun’ and ‘I Was Made For Loving You,’ the two songs he sang on that little stage, he seemed to be singing for real. I had floor tickets, and was right in front of that stage. Other than the time I met Paul (see my avatar), this was easily the closest I have ever been to him.

Gene’s vocals were super-strong; and he and Paul could each could be heard doing background vocals on the other’s songs. Speaking of background vocals, Eric Singer remains the champ; he is truly remarkable, bringing so much to the sound with his vocals.” Slash revealed a gross photo of Gene Simmons shoving something up his nose a few days ago.

This is my beautiful wifey Shannon impersonating yours truly…I never realized how good looking I actually am! pic.twitter.com/uQQaZ7WlDy