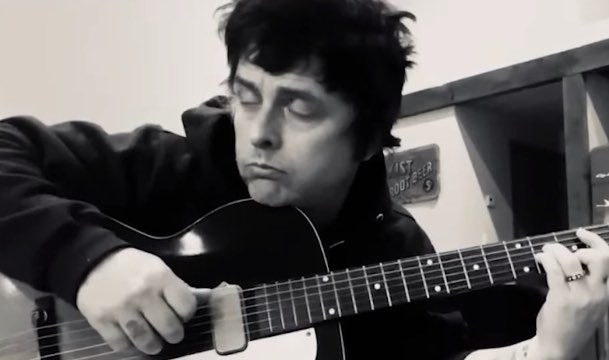 Green Day singer Billie Joe Armstrong put on a hilarious pouty face in a new video where he plays a teaser from Green Day’s new ‘1972’ album or EP. You can watch below.

Green Day frontman Billie Joe Armstrong recently pulled out of Miley Cyrus and Pete Davidson’s New Year’s Eve special after he revealed being exposed to the virus. The NYE spectacular is set to air live from Miami on Dec. 31 starting at 10:30 p.m. on NBC and Peacock. Green Day & Van Halen Members enjoying a party was also recently revealed.

“After the holiday I found out I was exposed to the virus. I’ve tested negative but I have made the decision not to travel to Miami for New Year’s Eve Party out of caution,” the rock star, 49, wrote via Instagram Stories. “Happy New Year and hope everyone stays safe!” Acts who ended up still performing include Saweetie, Jack Harlow, Brandi Carlile, Anitta, 24kGoldn and Kitty Ca$h. Cyrus and Davidson’s special was replacing NBC’s New Year’s celebration, which is usually hosted by Carson Daly. The former “Total Request Live” host has been at the helm of the network’s New Year’s festivities since 2004.

The virus has affected the world of music pretty badly and it also forced NBC to cancel last year’s event. The last time Daly hosted was 2019 (going into 2020). Armstrong was not the only star who dropped out of a NYE’s show for virus related reasons. LL Cool J was scheduled to headline ABC’s broadcast “Dick Clark’s New Year’s Rockin’ Eve with Ryan Seacrest.” However, he had to pull out after testing positive for the virus on Dec. 29.

“I know it’s disappointing to the millions of fans but my test came back positive for the virus, which means I’ll no longer be able to perform as scheduled at NYRE,” the “NCIS: Los Angeles” star said in a statement, as reported by Deadline. “We were ready and I was really looking forward to ringing in 2022 in my hometown in a special way, but for now I wish everyone a healthy and happy New Year. The best is yet to come!”