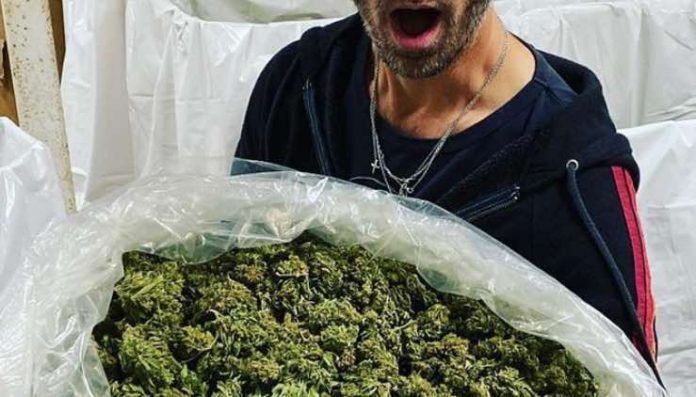 Green Day bassist Mike Dirnt was photographed holding a massive amount of hemp on Wednesday from Goldenseed. It looks like he’s smoking some good stuff! Goldenseed state that they, “Santa Cruz-based Goldenseed focuses on the cultivation, manufacturing, distribution, and sale of high-quality cannabis and hemp grown in California. Goldenseed focuses its efforts to minimize its environmental impact, while maximizing your ability to enjoy nature.”

Green Day have released two singles from their upcoming new album Father Of All Motherf**kers, and a fan on Reddit recently pointed out the key used on the songs. X-Games posted, “The two singles are in the same key, which is usually a no-no. (C#), which is odd to me. Might have to do with Billie’s vocal range, but I really wonder why fire ready aim is in that key. Seems it’d be easier on his voice, easier to play on guitar and would probably just sound better in B.”

Green Day’s singer was recently photographed with a rock icon’s widow. The Reddit user elaborated, “Singles are generally 4/4 time, upbeat, and almost always minor if you’re a rock band. So if you drop two singles in the same key they can blend together somewhat. That’s the issue here, if you listen to FOA and FRA back to back it honestly feels like the same song. FRA in B makes it easier to play on guitar since the open strum ‘breath’ you take while changing chords, especially in a song that changes chords as quickly as FRA, would be in key.

The A & D are what are most sonically prominent when you strum a guitar in standard without fretting. When you’re in C# minor, strumming open sounds out of key as fuck, in B minor it sounds fine while transitioning, which makes me think FRA is capo’d at the second fret. Also, B being a lower key than C# would allow Billie more room in falsetto and wouldn’t strain his voice as much, and would separate FOA and FRA more.” A Green Day member was caught wearing a horrible wig in a photo last week.