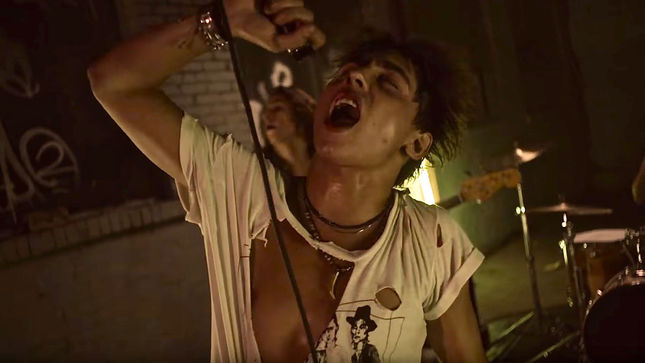 valleygrrl posted, “to the girl who snuck on to their bus after the show tonight…. Good for you. ❤️” valleygrrl added, “She opened the door and went inside.”

PrincessMau said, “Was this the young girl in the blue? My hubby and I waited for a bit to see if they’d come out, but then we were like, well whatever. I was wondering about that girl though.”

professional_cry wrote, “Sneaking onto their bus is crossing all sorts of boundaries… unless you are invited please don’t go onto their bus or try to sneak backstage.”

Greta Van Fleet singer Josh Kiszka was photographed kissing a young girl in an adorable video recently. valleygrrl chimed in, “Where does it say in my post that I said anything about a girlfriend or groupie. Just wondering.”

lifelongbruxr posted, “Why did you say snuck? I’m sorry but your post is very vague. Their security is very strict, so I doubt someone would just sneak onto their tourbus if it wasn’t either family/gf/or part of their crew.”

valleygrrl added, “First of all. It’s not that serious guys. When I see someone walk behind someone and look both ways before tip toeing into a bus. It might look like she was trying to sneak in. Maybe she is a girlfriend. Maybe who wants to avoid any excessive fans who might know just a little too much about them and their lives and it made her uncomfortable to see any of them.” Louisiana64 said, “Woa they have groupies… they’re real rock stars.” A Greta Van Fleet was photographed sleeping backstage at a show recently.