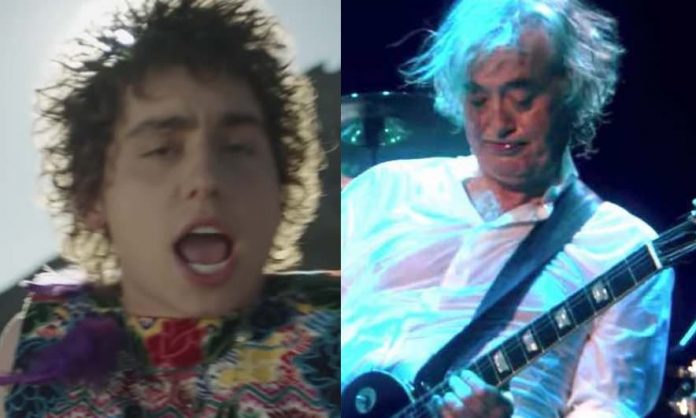 Greta Van Fleet bassist Sam Kiszka discussed Led Zeppelin comparisons, which Robert Plant has addressed directly with Jimmy Page remaining silent, stating that Josh Kiszka “borrowed his voice from someone I know very well.” These statements though haven’t appeared to threaten Josh and the Greta boys though, according to a new Guitar World interview. Greta Van Fleet ripped a horrible performance in a video earlier this week.

Kiszka responded, “Not really. I mean, it’s not like they aren’t the greatest rock & roll band ever [laughs]. It’s a huge compliment. I think the new record will pick up where we left off and show the many sides that Greta Van Fleet has in terms of soundscapes. And I think it’ll take our concept up a few notches. We’re also trying to keep live takes. We really value the natural feel of how we play live.”

He also discussed one of his favorite Led Zeppelin songs, “I’m a thousand times better than I was last year, because we have been playing live so much. With the new record, I’ve really been focused on melodies – songs like Ramble On [Led Zeppelin II]. People sing that bass line. That’s how you know it’s a fantastic bass line.”

Greta Van Fleet announced a ‘last performance’ recently. Willehsballs recently posted on the Greta Van Fleet Reddit, “F*** Anthony Fantano. I could elaborate more but don’t want to. we all know what he did.”

Mattszerlag chimed in, “He gave his opinion. You don’t have to be mad because he doesn’t share the same positive opinion you do. It was also over a year and a half ago, so you can rest easy and let it go.”

Lisa_Bdr responded, “He behaves as if he is trying to make everyone hate GVF but wants to make it look like he doesn’t.”

Keyfobman said, “I think that guy is so annoying. I can’t even watch his videos. Did he make a hate vid on Greta Van Fleet?” You can read the full Sam Kiszka piece at Guitar World.