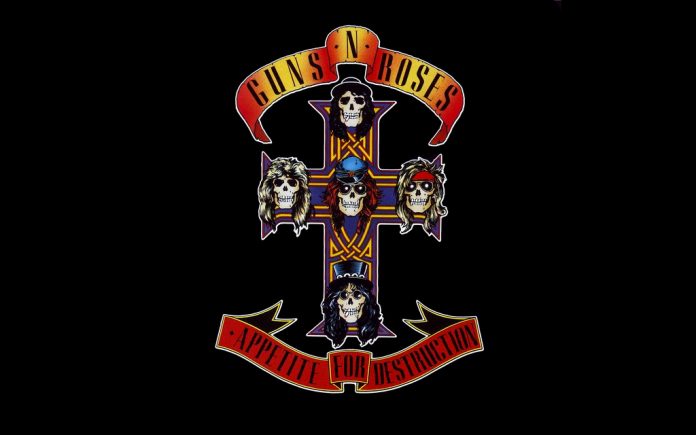 Guns N’ Roses have posted a photo of a winner of their poster design contest, and it shows the Appetite for Destruction artwork with Izzy Stradlin and Steven Adler removed, with Richard Fortus, Frank Ferrer, Melissa Reese, and Dizzy Reed replacing them. See a photo below. Fans on Twitter weren’t happy, and felt it disrespected Adler and Stradlin.

A fan named Tony responded, “Are there any other @gunsnroses Fans affended by this picture/poster? Half the people on it had nothing to do with the magic that is AFD.”

Another fan named Alaska responded, “Only 5 people played on appetite.”

Martin said, “Missing Izzy and the stupid Ferrer should be out.”

Elanan said, “many things to say about this…but none of them is good, so I’ll better say nothing….”

Former Guns N’ Roses drummer Steven Adler said he is sad he is not playing with Slash in a new LA Weekly interview.

“Slash is six months and one day younger than me,” says classic-era drummer Steven Adler. “I met him in eighth grade. He is probably one of the nicest, sweetest, smartest guys I’ve ever met. I love and adore him, and he means the entire universe to me. I’m sad that I’m not working with him. All I ever wanted to do was work with him. I know when we first met at junior high school, and he came over to my grandmother’s house, and I showed him my guitar that my grandmother gave me, he asked if he could borrow it. Within one week, he was playing songs. That’s how smart and talented he is.”

Congrats to the second winner of our poster design contest, DK13 Design! Submit your work and you could win an #AppetiteForDestruction Super Deluxe and more…
For details and to enter visit: https://t.co/WqhSKKgT9Y pic.twitter.com/cJewsX99Bk

Adler was asked about the Appetite for Destruction 30th anniversary reissue, and he said there weren’t too many pictures of himself and Izzy in the booklet.

“I guess there’s a couple pictures of me and Izzy in some little booklet in the back of the thing. I saw, somebody had it in Australia, and the book that comes with it was just of the new band, so the pictures really weren’t that cool.”

He was then asked if he knew about the announcement of the reissue.

“No, I didn’t know it was coming. I was like wow, this is great, maybe the great, smart, professional Fernando [Lebeis], Axl [Rose]’s manager, has something really cool stuck up under his sleeves ready to pull out like a magician, and make something really happen that the fans are going to love and want.”

He then detailed a conversation he had with Izzy Stradlin two months ago about what he’s currently up to.

“Izzy I talked to about two months ago. He just buys old cars, fixes them up, drives cross country to his ranch. He has a ranch in Indiana or something. He has a talent for living Izzy, living takes a talent, and he’s got talent for life.”