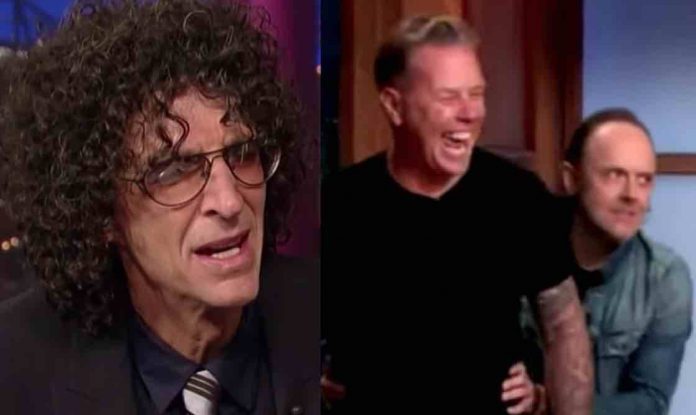 Howard Stern revealed that Metallica singer James Hetfield has entered rehab to deal with his ‘addiction’ on Monday. He and Robin Quivers said Hetfield entered an ‘addiction treatment center.’ Hetfield has admitted to dealing with alcoholism, as seen in the ‘Some Kind of Monster’ documentary. The sad last photos of James Hetfield before entering rehab were also revealed.

MarksFriggin.com recapped: Robin read more about the Global Citizen Festival and who showed up to that. She had a bunch of celebrities who were there. She had some clips of people speaking at the event too. Howard did a live commercial read after that.

Robin had Howard play some of Cream’s ”Sunshine of Your Love.” Robin said Ginger Baker has been critically ill and in the hospital. Howard said he didn’t look well when he was in Cream. Robin said that was a long time ago. She said his family isn’t sharing details of his illness but he has suffered a number of ailments over the past few years. Robin said he has had heart problems lately. She said he has COPD and other issues. Howard did a live commercial read after that. Howard Stern called out Green Day’s singer being rejected yesterday.

Robin read a story about James Hetfield from Metallica going back to an addiction treatment center. Robin had some audio of one of their songs for Howard to play. Howard said things seemed good when they were in there. Robin wrapped up her news and Howard ended the show around 11:30am.

Former Metallica bassist Ron McGovney reached out to Hetfield on social media after he entered rehab by tweeting, “James Hetfield has been a friend of mine long before @Metallica. I always looked up to him as a musician even when we were in high school. If he needs anything , he has my number. I have been sober for 2 years. It’s not easy. I’m with you big guy.” A crazy Jason Newsted bar photo surfaced a couple of weeks ago.