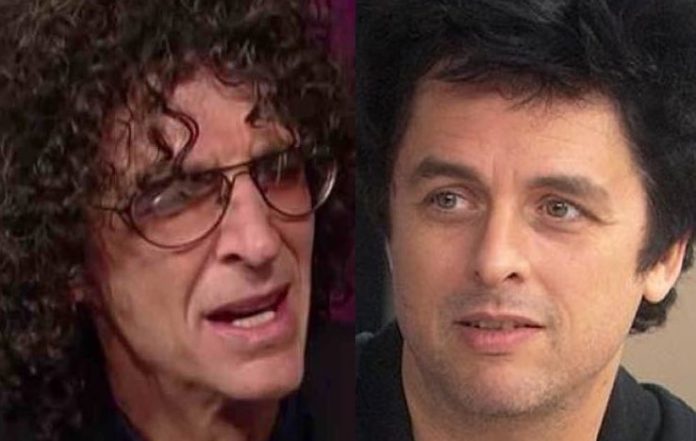 Howard Stern uploaded Green Day singer Billie Joe Armstrong performing “Good Riddance (Time Of Your Life)” on his show on Saturday. Stern revealed that he believed Billie Joe was rejected by women before being famous, and that there was a ‘bitter’ meaning to the song. Alternative Nation transcribed Stern and Billie Joe’s remarks. Green Day scrapped a ‘Dookie’ 25th anniversary tour for a surprising reason.

Howard Stern: I love this song, Good Riddance (Time Of Your Life). I’m bad at listening to lyrics, a song just kind of sweeps over me. This is really about telling some girl F you.

Billie Joe Armstrong: In the most levelheaded possible way of doing it, it’s pretty bitter.

Howard: It is bitter. That’s what I like about you. It’s quick and it’s angry. I like that, I admire that. Who is this written to?

Billie: A girl who moved away to Ecuador.

Howard: I like that you can get your anger out through music. Before you were famous, did you get rejected a lot?

Billie: Yeah, it didn’t happen on a regular basis.

Metallica’s James Hetfield has entered rehab, and a fan named StarLordandTheAve pointed out on Reddit that when Billie Joe Armstrong went to rehab in 2012, Hetfield made a nice onstage gesture.

“In 2012, Metallica filled in for Green Day last minute at the Voodoo Festival and James said ‘Are you guys hoping Green Day shows up tonight? Me too. Well, they’re getting help. They’re sorting it all out. We’re here stepping up for them, hopefully- hopefully he gets it together. Because the world needs them, alright? I think so…’

And they played a snippet of American Idiot, Rob played a little bit of Welcome to Paradise, and before they played Battery, James said ‘This one’s for Billie.’ I’ve been a huge Metallica fan since birth. The guys (Mike especially) have always been huge fans of them.

Metallica have delayed their tour dates originally scheduled for next month in Australia. James has checked back into rehab. I think what he said about Billie and the guys was a really nice gesture, and I’m sure they appreciated it.

I just wanted to mention that in what is probably a very tough time in James life, we should send out thoughts out to him as he once did to Billie. I feel if Billie was in the same place James was in 2012, he would do the same thing undoubtedly and help them out.” Morrissey recently unloaded on Billie Joe Armstrong for a stupid decision.