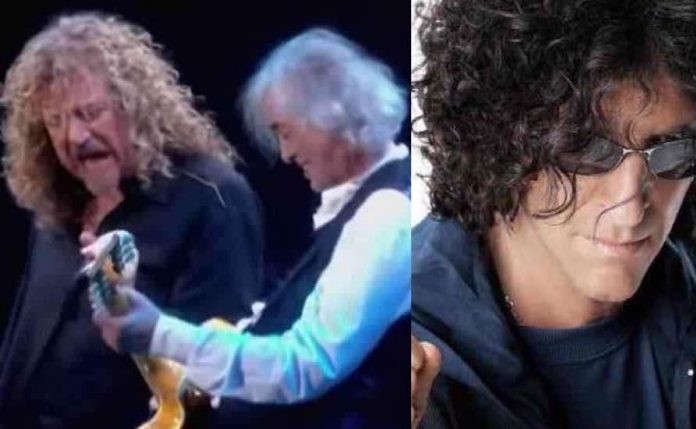 MarksFriggin.com recapped: He said he never thought he’d see them in the studio together again. He said someone guessed Sonny and Cher and they’d have to roll in his corpse to do that. He said that’s a ridiculous guess. Howard took a call from a guy who guessed it’s Robert Plant and Jimmy Page. Howard said stay tuned and they’ll find out.

Howard took a call from a guy who guessed Simon Cowell and Imus. Howard asked why he would do that. He said that makes no sense. Howard said it’s actually Richard Simmons and his maid. They went to break after that.

Robert Plant revealed a massive Led Zeppelin reunion tour offer last week. After the Black Crowes came on, Howard said he loves the Black Crowes with Jimmy Page. He said they did all of those songs and they were awesome. He said he thinks Chris did the songs like he wanted to. Chris said he was trying to do them that way but keep them like Led Zeppelin.

Howard said it’s so weird that Robert Plant won’t go out and perform with the band anymore. Chris said that they loved all of those bands growing up. He said they also grew upon Muddy Waters and Stacks and all of these great blues artists. He said they were younger but they had the same records that launched all of those bands. Howard played some of the stuff Chris and Rich did with Jimmy Page. The guys talked about what that was like working with Jimmy. Jimmy Page recently announced his music comeback.