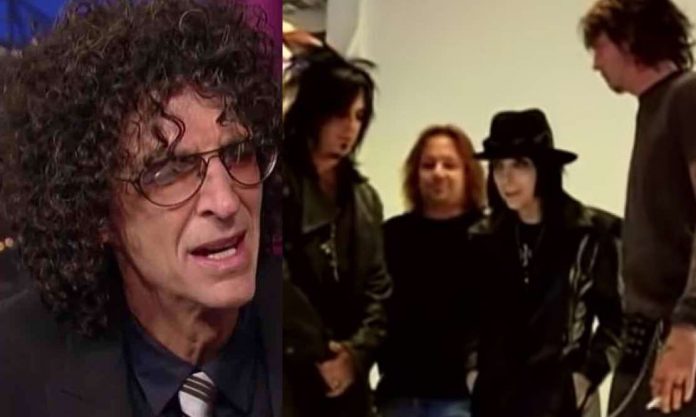 Howard Stern showed a photo on his show Monday of Motley Crue singer Vince Neil, where he claimed that even his driver Ronnie Mund looked better.

MarksFriggin.com recapped: Howard said he got Ronnie’s Christmas card in the mail. Robin said she did too. Howard said you see how young Stephanie looks and you see Ronnie there. He said it looks like when a guy on TV who kidnaps a 12 year old and puts her in the basement in a cage. He said then she gets released at like 30. He said it’s the best.

Vince Neil ‘struggling’ singing with the Motley Crue reunion tour was revealed a couple of days ago. Howard asked the caller, Kristen, if she’s staying with this guy. She said she is for now. Howard asked if she wants to see this woman that he was with. She said she is curious. Howard said he should have to show her who she is and tell her what he did with her.

Howard asked how he caught him. Kristen said through text messages. Howard asked if he knows his password. She said no but she caught him texting. She said her kids saw it actually. She said it wasn’t dirty stuff but she was suspicious so she asked to see his phone and she clicked on his contacts and a woman picked up. She said that he was texting her.

Gary asked if Howard saw the story about the guy who was caught through his Fitbit watch. Howard said he saw that. Gary said there was another guy who thought he had hung up on his girlfriend but didn’t and he was talking to his wife instead. He said he got caught.

Howard asked Kristen more about the therapy and told her to tell the husband she wants to read all of the texts and know how it all got started and for him to be totally open about it. Howard said she has to do that. Kristen said she did do that. She said he was living out of the house for a while. She said they are trying to reconcile now. Howard Stern took a brutal shot at the Motley Crue reunion a couple of weeks ago.