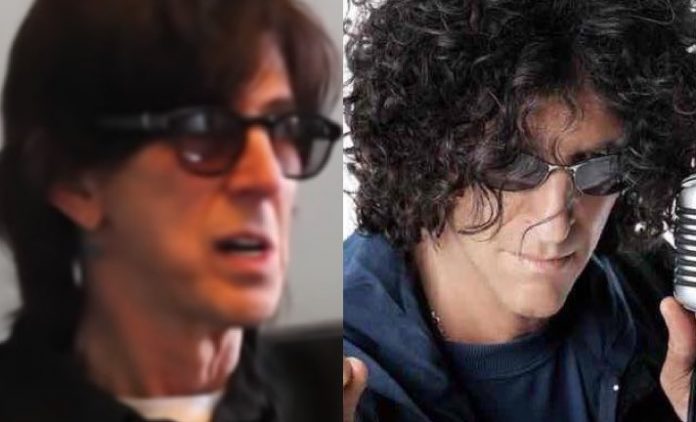 Howard Stern discussed The Cars frontman Ric Ocasek’s death on his show on Monday, and he announced that Ocasek died of ‘natural causes.’ Ocacek was killed by a heart disease. He also had Pulmonary emphysema, a type of lung disease. MarksFriggin.com recapped: Howard said he saw that Ric Ocasek died over the weekend. Robin said Eddie Money died too. Howard said he saw Ric had died and he opened the paper and it’s the same picture of him with his super model wife Paulina Porizkova. He said it’s the best ad for learning guitar. He said that he knows it himself. He said he loved The Cars and Ric. He said the first time he ahead them was up in Hartford and the album was huge. He said they were a Boston band. Photos from the home Ocasek died in have surfaced.

Howard said he remembered hearing these DJs talking about bands and he wanted to be like that. He said this woman Maxanne Sartori was a big fan of Ric’s and she would have him on her show in Boston. He said that they don’t even know how old Ric really was. He said he was either 70 or 75. He said he’s not sure how they don’t know. He said Ric was able to keep his real age quiet.

Robin said when they said he was 75 he didn’t think he was that old. Howard said when he married Paulina he thought that he looked like him. He said he figured he had to get famous quick if he could get her. Howard said it was the greatest thing ever. He said he hung that picture up and said he has to get into show business now.

Howard Stern recently made a bold Chester Bennington widow claim. Howard said he saw a picture of himself last week and Beth sent it to him. He said he was shocked by how bad it was. He said he needs to get plastic surgery. He said he watched that Roger Ailes show and he figured that girls reacted to him like they did with Roger. He said he looks in the mirror and he thinks he looks youthful. He said then he sees the picture and he’s shocked.

Robin said Ric and Paulina had separated. Howard said they say she found the body. Robin said they were having a friendly divorce. Howard asked what that is. He said he has no idea. He said she discovered the body. He said you’d think she’d let someone else discover it. Howard said he’s wondering what she was doing there.

Howard said he was checking out Ric’s glasses and he thinks that he might need to get something bigger. He said he has bifocals and he’s not seeing things clearly. He said he needs bigger glasses like Ric had. He said he had Mr. Magoo specs. He said he’s thinking of doing that. He said he doesn’t care about trying to look good anymore. He said he has hit the wall hard.