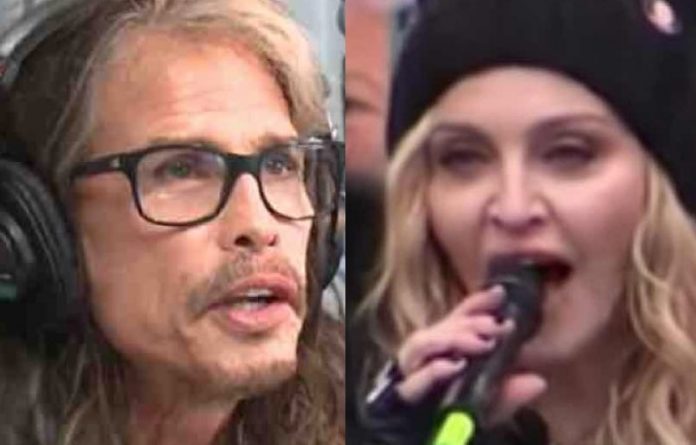 Aerosmith frontman Steven Tyler revealed it is sadly ‘tough’ for women like Madonna in the ‘man’s world’ music business, and he has a lot of respect for her. He said in a recent Howard Stern replay episode that he admires Madonna for doing what she does in a man’s world. He said it’s tough out there. Steven Tyler recently revealed how much each Aerosmith member is paid at concerts.

Just felt like showing how easy it is to put a set list together that would make 99.99% of fans very happy. Everyone gets basically what they want. 4bits4licks76 recently posted an Aerosmith fantasy setlist on the Aeroforce boards, and it got criticism from other fans. Steven Tyler recently revealed a stunning John Lennon widow phone call.

arrowmith responded, “What an awful setlist. We don’t like Kings and Queens on it. And Seasons already, and IDWMAT. and Jaded. You just don’t take out Toys. It´s like their best song. You always want to hear that. Dude and Rag Doll also among their very best. Rest Dream On WTW if anything. Just listened to an interview right Before Nine Lives was released. The crowd listening at the Ma Kin Club cheered loudly after every song played. They played half album during the European tour 97 live. That was EXCELLENT. EXCELLENT songs. Sounded GREAT! What an ALBUM!” Steven Tyler’s daughter’s photos with Brad Pitt recently surfaced.