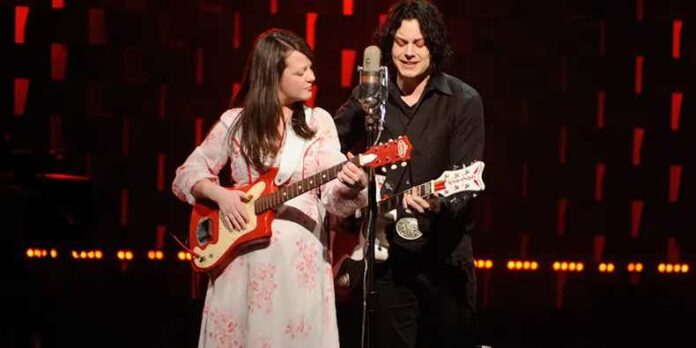 Jack White recently revealed how he wrote most of his upcoming studio LP “Entering Heaven Alive.” He divulged that he did not eat anything for 5 days so that he could see what effect fasting had on his creativity.

Jack White didn’t reach out for his guitar or piano right away – “Everyone’s writing the great American novel this 2020,” the musician says during a recent interview with Q on CBC as a cheeky remark on the widespread enthusiasm for finally doing That One Thing as the pandemic struck.

However, even Jack White eventually surrendered, and wrote not one, but two studio albums – “Fear of the Dawn” (released this April 8) and “Entering Heaven Alive” (to be released on July 22) – both via his own label Third Man.

Furthermore, as White tells host Tom Power, he decided to confine himself to his Kalamazoo, Michigan home and eat nothing for five days as he was working on the second album so that he could see how it affected his ability to write music (transcribed by UG):

“Yeah, I think it was five days with no food. I wanted to see what I would write under those conditions, under that idea, of being alone and fasting, to see what my brain and my body would come up with. Would I get frustrated? Would I get angry? Would I get upset? Would I be depressed? What kind of lyrics would come out?

“So maybe sometimes you’ll get a song like, ‘If I Die Tomorrow.’ [laughs] But also happy things came out it, things like ‘Queen of the Bees.’ It’s an interesting thing I was exploring, and I still explore that, what your body does. The energy amount your body gets on the second, third day from that, it’s outstanding, It’s not to be believed. And I’m not promoting this to other people in any medical sense.”

“There was a little bit of worry in my brain about making a solo record while The White Stripes were still an existing band. And so The White Stripes not being an active project anymore, and us announcing that to everybody, was the only way I could actually go over and make solo records at that point. Because I was concerned that people would say, ‘Well, why are you bothering with this? Why don’t you just make a White Stripes record? Why are you insisting on making a split in two different directions?'”

He added that he wrote the songs, Meg White didn’t contribute.

“I write the songs in The White Stripes anyway. I just didn’t want people to degrade The White Stripes or degrade the idea of me making my own record under my own name because of that. It seems a little bit trickier when you’re a two-piece band instead of a four-piece band. People just look at it differently. Maybe those worries were all unfounded, but that’s just the way it worked out anyway.”

“We announced that The White Stripes wasn’t going to be happening anymore, and then I did a solo record. It wasn’t a death in a negative way; it was a positive thing. It was the kind of death where you have a party at the funeral instead of thinking of it as a tragedy.

“We were never beaten down until we were on our last leg or anything like that. It felt like we closed that up while it was feeling incredibly positive. So that was a good thing to transition to—it made me feel comfortable about making a record with my name on it. And then once I finally did that, I almost felt, like, ‘Wow, what took me so long? Why did I wait so long to do this?'”