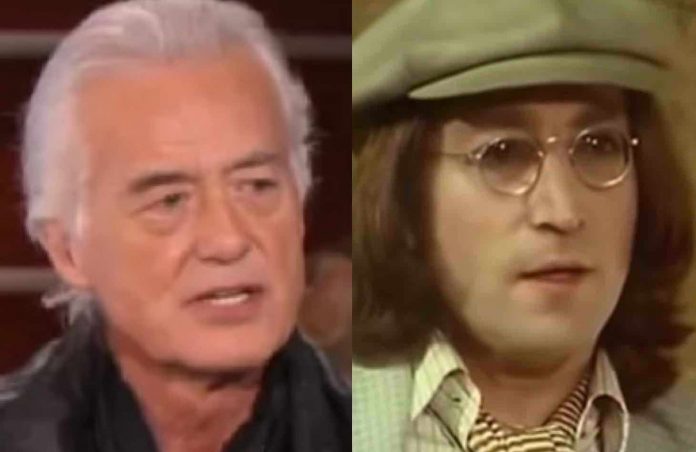 Led Zeppelin guitarist Jimmy Page discussed one of late The Beatles icon John Lennon’s most disturbing songs lyrically on his social media page, and revealed a big name who made a guest appearance and the help he had. John Lennon’s ‘love’ letter to a surprising man was revealed yesterday.

“On this day in 1964, ‘I’ll Cry Instead’ / ‘Those Precious Words’ by Joe Cocker was released.⁣ Joe Cocker’s performance on The Beatles’ ‘I’ll Cry Instead’ and the b-side; ‘Those Precious Words’ really impressed me. ⁣
⁣
These two titles were recorded in the Decca Number Two Studio in West Hampstead, Mike Leander had been in charge of the arrangements. Joe’s gritty performance on these tracks was something that really stuck in my mind so it was with admiration that I was to play with him again some years later on ‘With A Little Help From My Friends’ and indeed a number of tracks on his first album.”
⁣
Jimmy Page revealed what he did to Keith Richards’ girlfriend yesterday. Page added, “The picture is of Joe recording ‘I’ll Cry Instead’ with vocal backing by The Ivy League that included two members of Carter Lewis and The Southerners, but it was Joe’s performance on the b-side ‘Those Precious Words’ that really registered with me in the studio that day.”

“I’ll Cry Instead” was described by Cynthia Lennon as a cry for help. She said, “It reflects the frustration he [John Lennon] felt at that time. He was the idol of millions, but the freedom and fun of the early days had gone.” John Lennon later said the lyrics “A chip on my shoulder that’s bigger than my feet” was how he really felt at the time. John Lennon’s heartbreaking final photo with a surprising The Beatles bandmate resurfaced earlier this week.