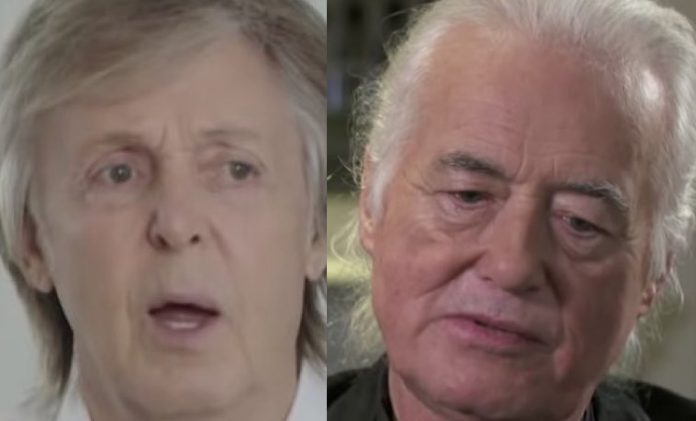 Led Zeppelin guitarist Jimmy Page revealed that Paul McCartney, who was disrespected by a surprising girl recently, and The Beatles hung out with his first live performance boss, Royston Ellis, after an early performance. A few days ago, Page revealed how he was robbed at a New York hotel during a Led Zeppelin performance>.

“On this day in 1961, the poetry at The Mermaid Festival was fully underway in London, with readings by William Empson, Louis MacNiece, Sir Ralph Richardson and Dame Flora Robson.⁣
⁣
I appeared on electric guitar with Royston Ellis, a British beat poet/beatnik with a fusion of poetry and music and this was quite unique set amongst the other poetry readings. Royston had visited a number of Neil Christian and The Crusader’s gigs and alluded to the lifestyle in the first chapter of his book The Big Beat Scene, published the same year.⁣
⁣
He also hung out with The Silver Beetles in Liverpool, pre- Hamburg.”

Jimmy Page took a brutal shot at a Led Zeppelin bandmate after a drug meltdown, according to a new interview. Producer Glyn Johns revealed to Music Radar that he played the first Led Zeppelin album for members of The Beatles, and they weren’t interested at first.

“We were putting the Stones’ Rock And Roll Circus together around the same time and I took an acetate of the album into a production meeting. I told them, ‘This is going to be huge,’ but Mick Jagger wasn’t interested in hearing it. I dragged George Harrison into Olympic Studios to listen to it. He didn’t get it, strangely. I still think that album is their best – it shook everything from the roots.

“They were an example of the kind of band that didn’t need much input from me. I kept my jaw on the floor throughout those sessions, just floored by their natural talents.”

whisperingbob commented, “I lived in William Empson’s house for a while when I first moved to London in 1966. It was a vibrant and incredible experience- a student house run by his wife Hetta.”

seeker_zohar chimed in, “Wow this is truly historical Mr Page!! You played the electric guitar for a beat poet ten years prior to Lenny Kaye with Patti Smith in New York, that is a detail in history that needs to be recorded. Up until now it was Patti Smith who had started that. Thanks for correcting history!”