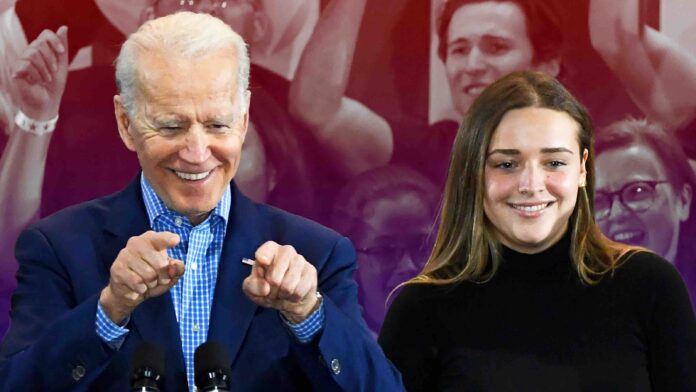 President Joe Biden was present at at the White House to witness Naomi Biden, her oldest granddaughter, marry Peter Neal on the White House South Lawn on Saturday. Pictures from the great occasion surfaced and one of the pictures saw Naomi’s picture taken from backside.

Check out the pictures below:

Photos of Naomi Biden and Peter Neal’s wedding at the White House.

One day following the nuptials, Biden will mark his spot in American history as the only octogenarian president, a numerical milestone that shines a spotlight on a primary issue plaguing Biden with his opponents: his age. Despite a spate of recent wins — better-than-projected midterm elections for Democrats, a relatively gaffe-less trip to Egypt and Asia, and a lackluster presidential announcement from his old rival, Donald Trump — Biden cannot shake being the oldest commander-in-chief America has ever had.

The wedding, which CNN is told includes the extended Biden clan on the guest list, as well as friends and family of the couple, also marks a kickoff of sorts for the tight-knit Bidens to begin earnest discussions over whether Joe Biden should run for a second term.

Shortly after the wedding, Jill Biden and Joe Biden will travel to Nantucket, Massachusetts, for the Thanksgiving holiday; Christmas follows quickly on its heels, as the clock ticks toward Biden’s need to say whether he will be in for 2024, or out. Both the president and the first lady have said they will weigh the pros and cons of a second run, something Biden has previously said he “intends” to undertake.