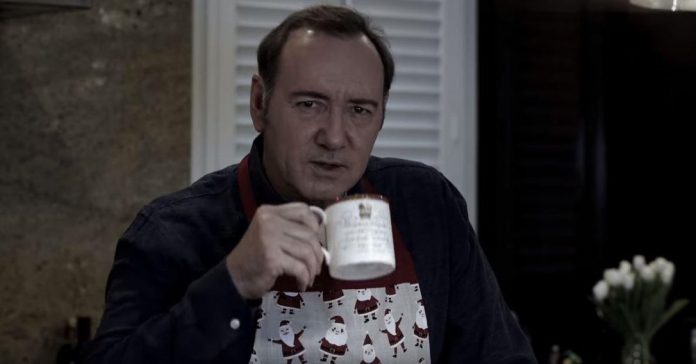 TMZ have uploaded a new video of Kevin Spacey giving pizza to a young male paparazzi photographer in Baltimore on Sunday. Spacey is awaiting a court hearing in Massachusetts next week for alleged sexual assault. In the video, which is very creepy especially with Spacey being accused of sexually assaulting many young man, he gives the young man pizza, and tells him he knows he’s just doing his job following him. He also tells him to stay ‘warm.’ Spacey then waves goodbye, and a cameraman follows him to his car attempting to question him, but Spacey shut the door. Spacey was wearing a ‘Retired since 2017’ hat.

Police are investigating Kevin Spacey for allegedly groping an 18-year-old busboy at a Nantucket bar in 2016 have a video of the incident, according to new reports. A Massachusetts State Police complaint details an incident between Spacey and a busboy at the Club Car, a restaurant and bar on Nantucket on July 7, 2016, CNN reports. The young man was in reality 18 years old, but he told Spacey he was 23. Spacey bought him alcoholic drinks and allegedly rubbed the man’s thigh before unzipping his trousers and rubbing his penis. The young man Snapchatted his girlfriend video of the incident, the complaint states.

Spacey recently released a video where he is in character as Frank Underwood, from the Netflix series House of Cards. He addresses the allegations against himself, and his character being killed off on the show.