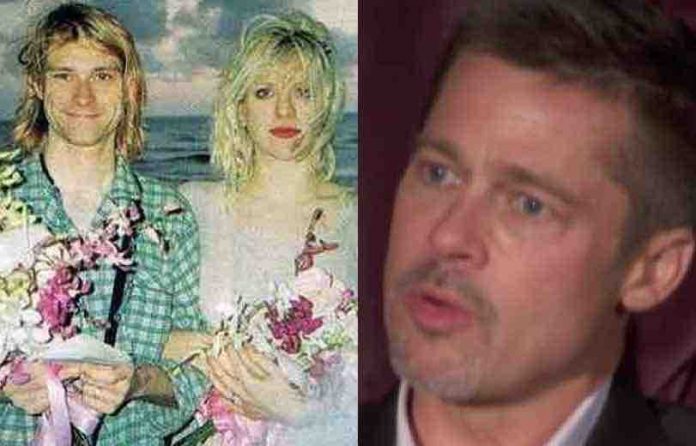 “Congrats brad! I hope I still have your smelly Tibetan sweater and equally smelly ‘pair o dice’ script somewhere! ‘ our ticket to the big show! ‘ 😂👌🎫🎫🙌I love it! When it’s done right it is magnificent, and no one deserves it more this year than you. #hollywood #bradpitt #oscars #thistown ❤️🙌#ponyboy.”

Pitt clearly gained weight before this photo shoot! Fans on the Nirvana Reddit recently discussed what Kurt Cobain would have done if he wasn’t a famous musician. Theblob2019 posted, “He would probably be an auto mechanic specialized in all-wheel drive cars of blue color. Or something like that.”

Afindragonyo responded, “He didn’t seem too keen on working. He even said in the Azzerad book that he basically couldn’t work like everyone else or similar things a few times. Plus he had a lot of issues he didn’t seem to want to deal with and the addiction was there since long before he got into heroin. I feel like he was on a destructive path even if he hadn’t gotten famous.”

Itsupforgrabsnow1989 commented, “Nobody is going to like to hear this. He would have still died young! Heroin is tragic. In Kurt’s case, I don’t believe fame was a factor. There are plenty of examples of other musicians surviving it.

I vividly remember the year building up to Kurt’s death, the break up of Nirvana?, the solo music I was so looking forward to listening to. It broke my heart.

Another sore point. Kurt’s only chance was not getting into a relationship with Courtney. Kurt had enough problems, she accelerated those. She was not a positive influence.”

Afindragonyo added, “Yea I actually think she showed a lot of signs of BPD but I can see why Kurt loved her too. She was crazy smart and outspoken, and a lot wittier than her public perception suggests.

But yes I think he was always headed for addiction and that it could’ve gotten ugly. I think Kurt was a sweetheart underneath it all but anyone who develops a heroin addiction can resort to lying and stealing and generally being abusive to anyone around them.

His millions allowed him to not have to resort to that, although I do think he became somewhat abusive towards the end and that krist and dave don’t really talk about it because they know it was the addiction. I’m speaking from the point of view of someone who’s been through heroin addiction.” Kurt Cobain’s widow Courtney Love recently revealed the ‘worst’ drug.