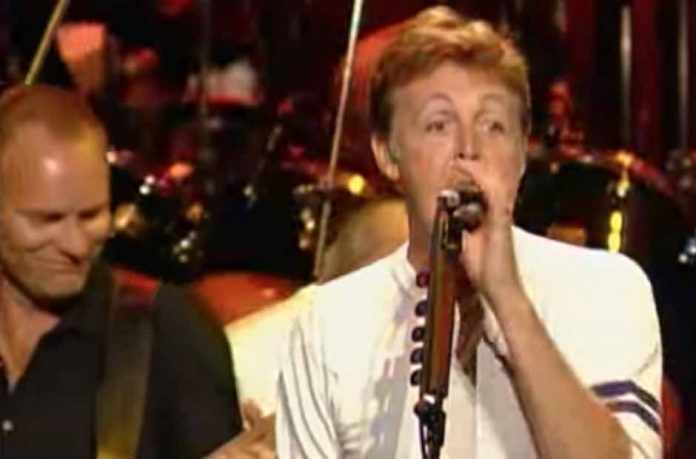 The Twitter user STRWBRYF1ELDS recently posted this scandalous picture of the Beatles co-founder, Paul McCartney and an unnamed female friend circa 1964 getting a little more than close. The fan can be seen giving Sir Paul a kiss on the Miami beachside. You can view this photo below. Paul McCartney ‘abandons’ terrible performance.

In other news regarding Paul McCartney and the Beatles, fans recently took to the Beatles subreddit to discuss Billie Eilish’s talked about cover of Paul McCartney and the ‘fab four’s’ legendary song ‘Yesterday’ from this year’s Oscars. Shivermetimbers68 proclaimed: “I’m not even a big fan of Yesterday but I thought she did a really good version considering the context. It fits nicely. What I find funny is that this ‘great’ song is so great with just Paul singing and playing acoustic guitar but if you have a girl singing it with just piano and you slow it down a little all of a sudden it’s “Oh my God this song is ruined and I want to kill myself!” I could understand if she did a completely different version but this is just a slowed-down version of the original. Paul McCartney caught ‘grabbing’ young woman at beach.

While ackpffft said: ” Billie Eilish is not annoying, she’s just not particularly interesting. My kiddo and I listened to her album a few weeks ago, and frankly, it just wasn’t that memorable. I understand that I’m not the target audience, but after we listened to her album, we listened to the Lizzo album, which I’m *also* not the target audience for, and it was much more interesting. Lizzo seemed to be a much better performer and had better material. As for this ‘Yesterday’ performance, in my opinion, the performance is trying too hard to be emotional and is actually working against the song.” Paul McCartney ‘losing voice’ at concert revealed.

Paul McCartney getting a kiss from a fan, Miami 1964 pic.twitter.com/HM1OQQUiaJ