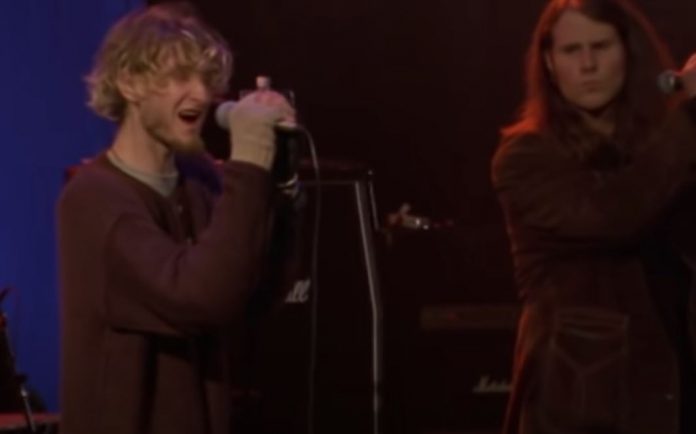 Late Alice In Chains singer Layne Staley rejected former Screaming Trees and Queens of the Stone Age singer Mark Lanegan’s claim that he had been clean for a year in a conversation that appears to have taken place around 2001, when Lanegan had cleaned up and was joining QOTSA after the Screaming Trees’ 2000 breakup.

Lanegan told Rolling Stone, “”Out of my friends, I was the guy who they always thought would never have a chance of getting clean because I was so maniacal in my approach. I would have climbed Mount Everest for drugs. I was always trying to kick. Layne was a magical person who was also hellbent on doing drugs until he died.

The first time I saw him after I’d gotten clean, I’d been clean a year. I’m pretty sure that [Alice in Chains guitarist] Jerry [Cantrell] and [bassist] Mike Inez flew me up to Seattle because they were unable to get into his house. He had a camera and lived in the penthouse of this condo. So whenever anybody from that camp would come to see him, he would just ignore it. Jerry and Mike knew that when he saw me, he would let me in.

I went along with that, and I also wanted him to see that I was clean, that it was possible to get clean, that his prediction that I would never be able to do it had failed. [Laughs] Hopefully, maybe, it would give him the idea that he, himself, could do it. But he didn’t want to do it.

When I got there, I said, ‘Hey, man, it’s been a while. I’ve been clean for more than 12 months.’ And he was like, ‘No, you weren’t, man. You just left, like, two months ago.’ His sense of time had warped. And he wasn’t buying the truth from me.

I remember him saying at that point, ‘I always just keep thinking I’m gonna get that same feeling I got the first time again.’ And, dude, I never got that first feeling again after the first time I ever did dope. I immediately had to do five times more to even get close to it. So for me, that was an impossibility, but that was his obsession.”

He later added, “It’s heartbreaking the way he went. I always knew that that’s what was gonna happen, although I always hoped there would be some medical emergency that would put him in the hospital and give him a moment away from the routine of crack and heroin that might give him a break and some insight. That medical emergency ended up being his death.”

Staley died in 2002 from a drug overdose, with Lanegan suffering the untimely death of another close Grunge singer friend, 8 years after the death of Kurt Cobain. Lanegan has discussed his regret over missing a phone call from Cobain shortly before his death.