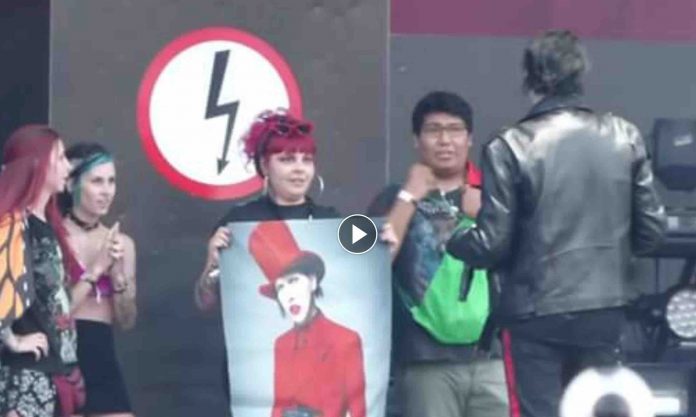 J-888 posted on the Avenged Sevenfold Reddit, “After 30 minutes of ‘fans’ boo-ing at Manson (almost everyone was there just because A7X was next), that dude asked to go on stage. The fact that he didnt knew the lyrics, shows he should have let someone else go on stage instead. So manson got pissed and that dude ‘payed’ for it.

Source: I was there. Awesome show on his side, awful crowd.”

Orseka Lynn Pablo commented on the Facebook video, “I love Marilyn and I’m gonna get pressed for this, but the guy looks so uncomfortable and upset when he asked him to remove the shirt. And before you say ‘there’s the liberal’ the guy who removed his shirt might have body image issues, idk. I love Marilyn but idk this video made me uneasy.”

Lyndsay Breanne commented on Facebook, “If this were a female everyone would be losing their shit. It wouldn’t be okay if it were a female and it’s not okay with a male. He’s obviously not comfortable doing it, people pay good money for your shows you don’t get to dictate what they wear get the fuck over yourself.”

Watch the video below.