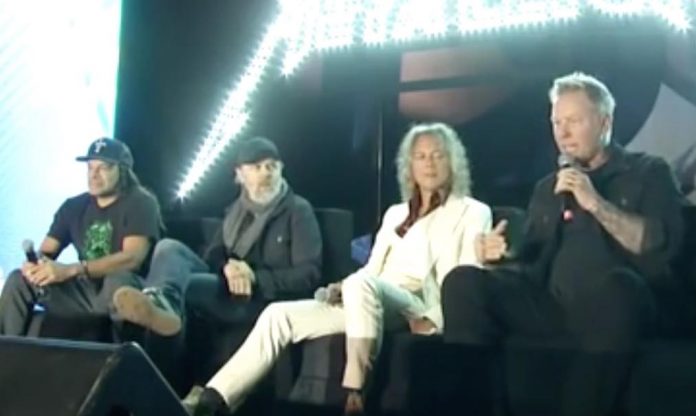 Before cancel culture, there was Beavis And Butthead. The two obviously don’t need an introduction. If you’re here, you already know about the two brain dead teens who made most of out childhood’s full of swearing and imitating their legendary voices. Every week, the duo would talk about bands they thought were cool and bands they thought sucked as they watched TV to make fun of music videos that would appear on their screen.

While the ‘yelling at the TV’ gimmick was great to watch, there was also a running joke in the show that the band, Winger, just plain sucked. Enter the character, Stewart. He was the kid who Beavis And Butthead would hang around, but never actually like. Stewart was a nice kid who was a pushover. He also happened to wear a Winger shirt which was a contrast to Beavis And Butthead’s Metallica and AC/DC shirts.

Winger guitarist Reb Beach (currently also of Whitesnake, also formerly of Dokken, Alice Cooper, and more) recalled the adverse effects being called out by the TV show Beavis and Butthead as well as their colleagues from Metallica had on his band.

Asked whether the TV show really had a role in Winger’s downfall during a recent interview with Ryan Roxie, Reb Beach said: “Absolutely, it did, hugely. As a matter of fact, we were on the road and we were selling out theaters. We were on the bus, and this kid said, ‘Hey, you guys got to see this cartoon. I brought you a VHS of it.’ And so we put this thing on the bus… In the cartoon, they hung this kid from his underwear from a tree.”

They got the message quick.

He continued: “He was wearing a Winger t-shirt, and he was overweight… His name was Stewart, and he was in every episode. And then they went to his house, and his parents were wearing Winger t-shirts, and the dog was wearing a winger t-shirt, and they were all nerds [laughs]. And so, we actually saw a direct result of that thing. In the weeks that followed, we had to cancel the tour because people wouldn’t be caught dead buying a ticket to a Winger show.”

What was worse was that everything was coming full circle from the show as Metallica joined in on some trolling.

He said: “And then, Metallica didn’t help with showing in their biggest video [in which] they throw darts at a poster of Kip Winger. They would show it at their live show, and my friend who went to see them said the entire arena laughed at that part of the video where Lars throws darts at Kip. I sold all my guitars, 20 guitars. I just bought a house in Florida, sold that – I was only there for 10 months – moved back to Pittsburgh from Florida, which I wish I didn’t have to do. And that was a really rough time.”