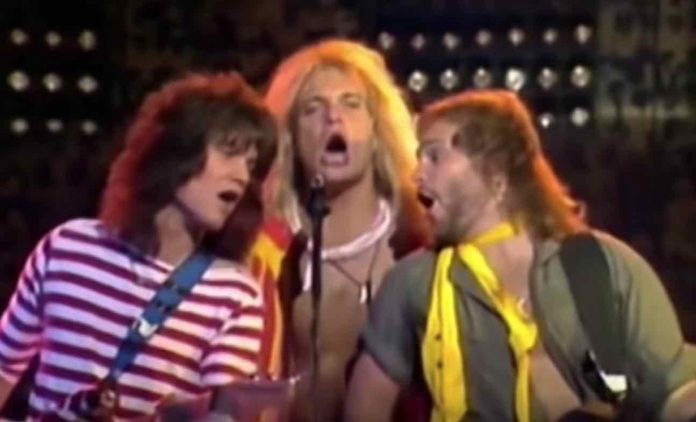 Former Van Halen frontman Sammy Hagar recently posted a rare 1996 photo with Michael Anthony, Eddie Van Halen, and Alex Van Halen, right before he was allegedly ‘stabbed in the back’ by a bandmate, and Anthony has revealed that contrary to what some haters says, he thinks Eddie Van Halen is really, really ridiculously good looking.

Hagar recently discussed his relationship with women on The Howard Stern Show, as recapped by MarksFriggin.com: Howard said when you’re rock stars it’s a hard party. He said when you’re on the road you’re taking full advantage. Howard said he went to a Van Halen show when they were at their height and he heard there was a tent under the stage that they could be intimate in. He said Sammy was single at the time.

Eddie Van Halen’s wife recently made a quitting revelation. Howard said when they were doing shows and he’s singing his heart out and then Eddie does his guitar solo and he’d go under the stage. Howard asked if it was true that 5 women were down there. Sammy said not every night but there were plenty of women there. Michael said that when Sammy was in there Eddie would end his solo and Sammy had to come running up on stage. Howard asked how that all comes about. He said they can’t arrange it while they’re doing a show. He said they have to have people. Sammy said that you have a guy. He said they all had a guy who did that for them.

Howard asked if they feel like a god. Sammy said not at all. Howard said they can have anything they want. He said the women are just there. Sammy said you can have the time of your life in rock and roll. He said he had the time of his life. He said he wasn’t a bad guy though. He said a bad guy can get himself in trouble in that business. A Van Halen icon recently revealed who is ‘highest paid.’