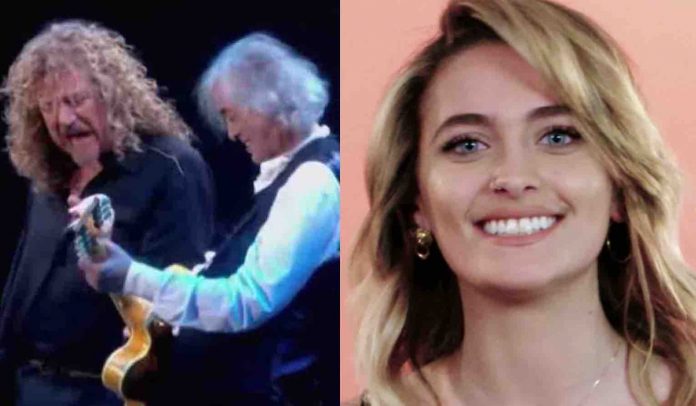 She tweeted, “Was planning for a few months on just getting zoso but then i said f*** it and.”

She liked a tweet by a fan named Surfnakd23 who said, “ZEPPELIN!! you’re awesome for this. ive met robert plant but if i could meet anyone….. its jimmy page 🎸”

Paris also liked Mxlxikas’ remark, “I hope you know I’ve had a feeling and BEEN waiting on you to get a Zeppelin tattoo. And please tell me why I am so happy about this it’s like I’m living this moment vicariously through you 😂🤘🏽.”

Jimmy Page recently posted on social media, “On this day in 1967, I played at Sydney Stadium with The Yardbirds. This is the first of two dates at the stadium. The bill comprised of local artist and very good singer Jeff St John, The Walker Brothers (Scott Walker some years later was to make a major dent in alternative circles with his solo work), The Yardbirds and the amazing Roy Orbison. This tour gave me the opportunity to speak to Roy, one of my rockabilly heroes about his time at Sun Records.”

He also announced, “Based on the overwhelming response to the limited edition @sundragonamps amplifier, I am pleased to announce that we will be producing a standard production model Sundragon amplifier.

The Sundragon Standard is a follow-up to the immediately sold-out limited edition
amplifier introduced and delivered in 2019. The Standard is a faithful recreation of the amp that I used on Led Zeppelin I and other notable recordings such as Joe Cocker’s With a Little Help from My Friends.” Jimmy Page recently made a painful Eric Clapton claim.

was planning for a few months on just getting zoso but then i said fuck it and pic.twitter.com/iiBsq47wsk